Feel free to edit my page or whatever, as long as it's not something stupid like removing text. I'm trying for the complete wiki-ism experience here.

Kuukai2 (第二次空海) is an editor of the .hack//WIKI, specializing in commas, translation, and nitpicking. I founded a Betterman/GaoGaiGar Wiki, so go show support if you're a fan of either! It's currently in the mass cleanup stage.

Warning: This section may contain fanon.
As Kuukai, Kuukai2 is an administrator of dothackers.net, and hopes that one day Kulaguy won't hate his site. His best friend is totally AuraTwilight. :D However, Amaethon loves Kuukai more than AuraTwilight. But just like everyone else, Kuukai is obviously gay for En-Sama, leading to a Love Triangle. Kuukai is also Kite X's best friend and has BFF rings. Or at least, Kite X has one. Until one day, Kuukai2 totally steals Kite X's bracelet and Data Drains him, thus, turning Kite X into Azure Kite. Too bad after this transformation Kuukai becomes the MORE TRUE Tri-Edge and rips off all of Kite X's stupid limbs.

Kuukai refers to a flightless bird found only in the Gobi Desert. It is known only for it's ability to awkwardly stare at anything. This stare, if maintained long enough, can trap hopeless, dehydrated travelers into a fit of lust. The bird is incredibly long lived. The only captured specimen (caught 9/10/1978) died in captivity only four days later. Autopsy showed that it died choking on a cheap plastic ring baring the initals B.F.F.. Leaders of the suspected terrorist organization, Benevolent Friends of the Fruedians were arrested the following day for questioning. Charges were dropped when no conclusive evidence was found, however vigilanty justice succeeded in distroying their headquarters and the B.F.F. were forced into hiding. The Kuukai's remains were buried within the campas of Oxford University before a crowd of bewitched mourners on sept. the twentieth of 1978.

Warning: My sense of priority probably conflicts with yours.

The following images may have weird aspect ratios and need validation. I myself may have uploaded a few before I realized the games were 16:9. Feel free to modify this list.

If this is wrong, so are pretty much all of the Udeden episode screenshots... 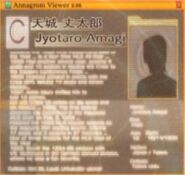 The World (based on Emma Wielant's epic poem "The Epitaph of the Twilight") takes place in a fantasy setting where beings such as gods and fairies exist. The Material Side and Magical Side of The World interfere with each other, shifting balance back and forth, and this resulting cycle is controlled by the Wave (紋).