Do we really want to use ENEMY info for the monster pages proper? ENEMY kinda just makes up its own stuff for a lot of the monsters or items, I personally think we should just go with the info from the games. - Kuukai2 00:08, 9 May 2007 (UTC)

Err... no. The ENEMY info mostly comes from the localization team, which is why there's a lot of Liminality Easter Egg crap floating around in the ENEMY cards. The ONLY reason I saw to use the ENEMY cards as a source was for Puchi's, and Kaoru's name, and even then, I think we put a note that the name came from an ambiguously canon source. Kulaguy 01:43, 9 May 2007 (UTC)

I agree with Kula. ENEMY can be used as a source to give a name to the nameless, but unless we can prove there even are subdivisions in R:1 (via an official strategy guide or something) I don't think we need them. Same thing with the quotes I think, more or less. - Kuukai2 01:58, 9 May 2007 (UTC)

Kuukai, tell me where you get the katakana symbols so I can do it to the other pages and tell me more about where you got the Japanese divisions. - Ruthborn 17:54, 10 May 2007 (UTC)

On this FAQ site, go to モンスター出現エリアリスト in the page, and then underneath the listing of the four games you'll see monster lists by number/division. Unlike any English guide I've found, it also has elements/tolerances (pretty much confirmed if you look closely at the ENEMY cards, or play the game). My hunch is that they got this info from the strategy guide. It would be nice to get our hands on one, especially if it has, say, stats for the monsters (attack, etc.). I wonder if anyone has the one that came with the first issue of The World... (I was only able to get Issue 3) Also, for incomplete pages, please use the "cleanup" tag. - Kuukai2 15:54, 9 May 2007 (UTC)

"Size" isn't actually in the R:1 monster template yet, though we could add it (type too). There are three sizes (S,M, and L?) and you can simply extract it from the kind of virus core the thing drops. Also, on the Japanese site, each DD-capable monster has either "Physical" or "Magical" in its "DD" column (what each type turns into is described on a different page). Any idea what this is? - Kuukai2 16:10, 9 May 2007 (UTC)
What do you mean by 'data drain capable'? You talking about the data bugs? If so then it probably means the tolerance. Like Physical Tolerance or Magical Tolerance. - Ruthborn 11:06, 10 May 2007 (UTC)

Kuukai, my computer can no longer display japanese and it has been a while since I have visited that site. Can you provide a more accurate link to the monster stat pages please. Ruthborn 10:52, 25 May 2008 (UTC)

Ok. I'm pretty sure these are all in order by monster number/category:

Now should we split it???

Hmm... I still think we should do it later. We should probably wait until Rebirth is released in English to get the official names. Anyone else wanna commment on this?Kulaguy 09:50, 17 June 2006 (UTC)

Though unless they horribly change things the official names will be probably be very similar. - Kuukai 19:16, 17 June 2006 (UTC)

Move it now? You could even just have the page 'Monster' link to Category:R:1 Monsters and Category R:2 Monsters pages. Was also wandering if the english guide had monster stats. --Phoenix 18:50, 4 November 2006 (UTC)

This is a very annoying decision for me. For one, people know him as Tri-Edge, but is labeled as Kite in the game. But naming him Kite will confused people thinking it really is Kite, when it's actually Tri-Edge. Anyone care to put their opinion on this issue? Kulaguy 08:09, 2 July 2006 (UTC)

I have pics (mostly black and white but still good) and full stat info on a lot of these monsters. Should I make a template and put them all in on one page, or give them each their own page? (I have no idea how this works because it isn't done for the R:1 monsters yet). At worst names will change in the U.S. version, but pics and stats won't, so lots of people will find this info immediately useful come the game's release if we add it...

You can make a separate page for each monster since this page will get too large if we put all the info in it. Though, don't start yet. Tell me what I should put on the template so that I can start working on it. Kulaguy 08:09, 2 July 2006 (UTC)

I agree, seperate pages would be good. We can make ones for the original monsters as well, since all their stats are in the Ryu Books. If we can find copies of the ENEMY cards we can get pics for them as well. --CRtwenty 16:43, 2 July 2006 (UTC) 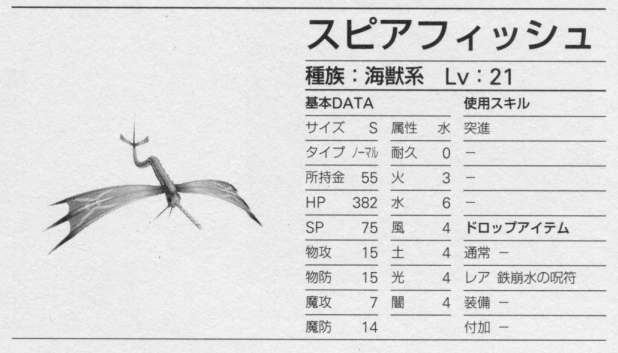 Erm, should I make the template? - Kuukai2

As these lists are made there will be title clashing. Already there have been two between the 'Drygon' monsters of the R1 and R2 Worlds and between the 'Guardian' monster and 'The Guardian' (or Twilight Guardian). - Ruthborn 09:08, 11 May 2007 (UTC)

And especially Data Bugs like 'Gr=go&a!': There are up to four of them!
Maybe we schould wrote the number or the Version of the World into brackets.
Salix Alba 07:37, 13 August 2009 (UTC)

Oh, sorry, I just now played the game in English, and there the monsters have the same names, as those in the wiki. Looks like they have these names I wrote only in German. Salix Alba 09:13, 14 August 2009 (UTC)

Here's a site that has the stats for the World monsters. I've check out a lot of them, and they seem to be accurate. This list could be used to complete the pages. http://www.neo-prosperity.net/LindzChan/Dothack/quarantine.html Dmitri Valentine (talk) 04:03, September 9, 2012 (UTC)

The information is valuable. Thanks.

Retrieved from "https://dothack.fandom.com/wiki/Talk:Monsters?oldid=66496"
Community content is available under CC-BY-SA unless otherwise noted.