The vast majority of this information came from .hack//Liminality's third volume. Some info also came from the AI buster novels.

One thing I'm questioning is the timeline in the beginning of AI buster 2 that listed Emma's death in August of 2004. The death was most likely around 2004-2005, but where did this information about August come from? Was it a timeline in the original Japanese text or an educated guess on the part of Tokyopop? O.o

I uploaded the Timeline found in the Japanese version of AI buster 2. Look through it yourself. 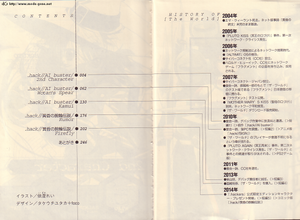 I don't see squat about August in there. :\

Both quotes mean the same sentence?

Well, in the beginning of the article it says "The hand that spun a legend will also become a legend itself" and in the end it says "Creator of legends, rest here now, as your own legend." Well, aren't they just the same? CloudKai 06:24, 18 December 2007 (UTC)