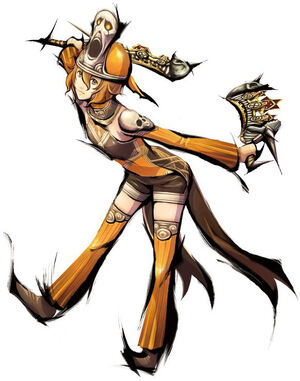 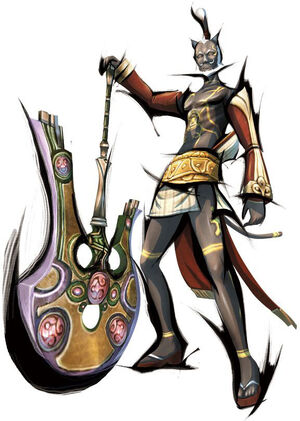 Invincible Jahad and Yokochi Taro, according to the Perfect Guidebook. I'm adding sections on them now. --Shinsou Wotan 18:15, 24 June 2007 (UTC)

Is that romanization straight from the perfect guide or something? 'cause according to various listings he's "Yokochi Tarobe", with the probable title of "Ghostly" or something (from 剣妖) - Kuukai2 22:35, 24 June 2007 (UTC)

The title of his section in the Perfect Guidebook is 剣妖横地太郎兵衛 (where the bolded text is larger than the rest), and the romanized text right below it says "YOKOCHI TARO". Since most of the other entries in this article follow the Perfect Guidebook romanized text for names, I decided to go with that rather than attempting my own translation. --Shinsou Wotan 22:50, 24 June 2007 (UTC)

Yes, in the same way that it's Kaotin and Natsume, not Kaotin in the Shadows or Natsume the Edgemanic, I'm pretty sure it's Cervantes and Genjyo. At least that's how it is in the Japanese version. This should be verifiable in the English version in their life bars... Maybe on Youtube? - Kuukai2 17:54, 2 March 2009 (UTC)

That sounds correct. I searched however, Natsume was the only video recorded in battle. Still there is a video of Kaotin with her title shown while she is speaking. Since the title shows in red and their name in white then likely they are separate. http://www.youtube.com/watch?v=u_xtFseKmcM Outlaw630 18:51, 2 March 2009 (UTC)

The perfect guidebook only lists some of the character's CV. For those without one there is a line. The same applies for guilds and other data. I took that as N/A. Outlaw630 03:41, 4 March 2009 (UTC)

Oh, as long as they're not actually voiced I guess that works then and you can change them back. Might be worth checking though, since if they're lying it should be ? and not N/A. - Kuukai2 17:36, 4 March 2009 (UTC)

I added the CV for the characters in the guide book, I am having trouble reading the kanji can anyone help fix it. I left Japanese characters next to the name. Outlaw630 08:10, 5 March 2009 (UTC)

Retrieved from "https://dothack.fandom.com/wiki/Talk:Chaotic_PKs?oldid=46275"
Community content is available under CC-BY-SA unless otherwise noted.