In his appearance in .hack//Link, he is missing an eye, and his armor now has greenish-blue tattoos all over. His armor now appears closely resembling samurai armor, with his helmet horns much longer and his shoulder pads have increased length.

He is still obsessed with Subaru.

His Cross Rengeki is probably one of the most comical in the game. He charges at the enemy, knocking over Tokio and constantly attacks, while hearts surround him and he keeps chanting Subaru-Sama. 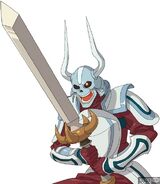 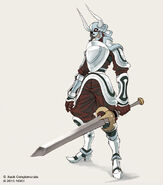