Shino (志乃, Shino) is a character in .hack//LINK who had previously appeared in the .hack//G.U. games as a friend of Haseo and a member of the long-defunct Twilight Brigade.

As in the G.U. games where she first appeared, she shares the same character model with Atoli, another friend of Haseo. Her LINK appearance, however, carries minor alterations to further distinguish herself from Atoli. Her sleeves are shorter, giving room for a loose bracelet on each arm. She also dons a red scarf. Finally, she does not wear gloves in her black outfit, remaining barehanded as she was in her white outfit in Roots.

In her Xth Form, her hat changes its large, round shape into one that is flat and square, similar to that of a western graduation cap. The tassel of the hat has changed shape and has included a light ring that surrounds it. Her red scarf is shortened and neatly tied off in the front. Her one-piece dress now has longer tails at the back, and has been slightly changed so that it resembles a light jacket with a plain pink shirt underneath. As with all Xth Forms, her weapon undergoes a change as well. The top of the staff is now spherical with a sort of spiraling design surrounding a smaller sphere that has its own ring circling it.

She is another mentor to Tokio. Their relation is almost the same as Ovan and Haseo. 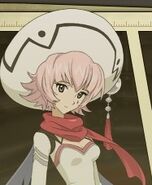