Shino (志乃, Shino) is a female Harvest Cleric with the same character model as Atoli. She was the co-leader of the Twilight Brigade guild, which she ran along with Ovan.

Shino is a somewhat scantily dressed pink-haired Harvest Cleric. She wears a white corset, white stockings, and a white hat. She also wears a short gray cape on her back. Though usually weaponless, she pulls out a staff when danger approaches. A teardrop-shaped tattoo is located below her left eye. She later changed her appearance to a darker look, with a different wave symbol and mostly black clothes. This was done in order to demonstrate her resolve in waiting for Ovan. Shino continues using this look during the games; she has silver hair in G.U. and blue in G.U.+. For the game and novel her previous appearance has blond hair. In the flashback towards the beginning of Rebirth, Shino is shown in her black outfit. However, the scene took place in Roots, in which she was in her white outfit. A noticeable coincidence is Shino goes from a white colour scheme to black, while Haseo goes from a black colour scheme to white.

Although polite and charming, Shino acts distantly to most people. She keeps her feelings inside, only expressing her true emotions to her close friend Ovan, who she constantly worries about (and eventually, to Haseo.) She might seem composed to the casual observer, but inside her mind is a very depressed young woman. Despite the best efforts of the other members of the Twilight Brigade, Shino remains a mystery to everyone but Ovan. 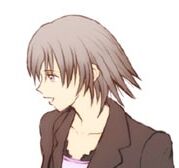 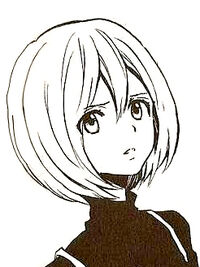 In the real world Shino is a college student in Saitama named Shino Nanao. She lives alone, and has met Ovan in the real world. She also appears to suffer from some sort of health problem. After Shino falls into a coma, Ryou (Haseo) visits her everyday. Moe (Tabby) eventually does as well, and even meets Ryou, although she doesn't reveal her identity.

Although she loves plants, she lives in a small apartment and has nowhere to grow them. She dreams of one day living in a large house and filling it with Corn Dracaena. There are also a lot of books about nursing and caring at Shino's home. 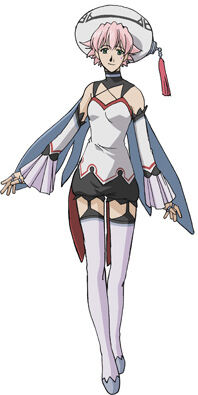 As one of the leaders of the Twilight Brigade Shino was ordered by Ovan to find the newbie Adept Rogue Haseo and encourage him to join the Guild. Though her efforts were unsuccessful, Haseo eventually joined the Brigade after some prodding by Ovan. Haseo proved to be a great help to the Guild, by locating Virus Cores and finding how to access a secret dungeon inside one of the Lost Grounds. However, when the Brigade explored the dungeon they found themselves attacked by agents from the rival Guild TaN. Ovan entered the dungeon alone during the fight, and mysteriously vanished. In response Shino used some information that Ovan had gathered to expose TaN's illegal activities, and managed to get the Guild disbanded. To everyone's surprise, Ovan did not reappear after TaN was disbanded.

With her close friend missing, and the Guild missing one of its key members, the Brigade began to slowly fall apart. Soon Haseo and Shino were the only members left. Shino decided to break the Guild, and wait for Ovan to return. Haseo promised that he'd wait along with her. As a sign of her resolve, Shino adopted a new look, replacing her white clothing with black and changing her pink hair to white.

Eventually Shino received a message in game, apparently from Ovan. She rushed to meet him at the Hulle Granz Cathedral but found tragedy waiting for her instead. Haseo arrived soon after, just as she was falling to the ground, dying. Despite his efforts to save her, Shino was killed and fell into a coma in the real world, becoming a Lost One. Azure Kite (Who was thought to be Tri-Edge) was at the scene, making him the most likely suspect. Haseo vows to find and kill "Tri-Edge" in revenge.

Episode 25 (Truth) reveals that Ovan was the one who PKed Shino, though it is implied to be accidental. A short flashback shows Ovan appearing in the cathedral as Shino walks in. She runs to him, but somehow the device on his arm opens, and what was inside killed her almost instantly, revealing that Azure Kite was not the one who sent Shino into her coma.

Haseo swore vengeance against Tri-Edge after she was killed by him, an event which left her in a coma in the real world. Shino was the original Innis Epitaph User, but the Morganna Factor detached itself from Shino when she became a Lost One to find its next Chosen One. At various points in the game, Shino is featured in flashbacks from the time of Roots.

Following the destruction of AIDA and then Cubia, Shino awoke from her coma and returned to the game. Her return seemed to leave Haseo torn between his feelings for Shino and Atoli, but she encouraged him to follow his heart, allowing him to follow Atoli. She also proposed the idea of reforming the Twilight Brigade to find Ovan, but was never answered. Shortly after, she gave Haseo her member address again and rejoined him. Following the event of the Forest of Pain, Haseo told her about meeting Ovan at the bottom, and his feeling that Ovan will return someday. She simply smiled at him.

In the final episode of Online Jack, Michiru and Salvador reflected on how little they actually knew about AIDA, when Shino passed by them and mysteriously said "Opposing mirrors of hope and despair". When Salvador reacted with surprise, she got in an elevator and simply said "That is what AIDA is" as the doors closed. Down the hall, a nurse removed Shino Nanao's name from a door.

Atoli, with her strong resemblance to Shino, often causes Haseo to have flashbacks to his time in the Brigade. Later Yata reveals that he's been keeping her unconscious PC body in The Serpent of Lore, when Haseo confronts him about this Yata tells him that Shino was formerly the Epitaph PC for The Mirage of Deceit, but that her Avatar fled her PC Body when she was PKed.