Sakubo (朔望, Sakubō) is a female Shadow Warlock and an Epitaph User titled "The Machinator" who is able to summon Avatar Gorre.

Sakubo's appearance is that of a young girl with blond hair and a harlequin outfit. She wears a large oversized jester's hat with ornaments resembling the sun and the moon hanging from it. Depending on which player is active, the hat changes slightly. When Saku is playing the sun symbol is raised up, and while Bo plays it's exactly the opposite, with the moon symbol raised. Other notable features include the fact that while Saku is playing, her hair flairs up to give a spiked look, but while Bo is playing, his hair lays flat. Also, the "skirt" that Sakubo wears changes. While Saku is active, it opens up into a skirt, while it resembles a pair of shorts as Bo. Another difference is that Saku's backpack is red while Bo's is black. When fighting she uses a large book to cast spells, as typical of her class. Sakubo's grimoire has a sun and moon motif on each side of the cover. Coincidentally, Sakubo's Lost Weapon changes in appearance depending on who uses it. When Saku uses it the cover and back are two suns, and when Bo uses it they're two moons.

Saku is very aggressive, intense, and prone to holding grudges. Thinking of herself before others, she'll often do things like spend money painstakingly gathered by her brother without permission. She puts her adoration for Endrance over everything else, antagonizing anyone who dares to approach him. Saku, however, is very protective when it comes to Bo.

Bo, on the other hand, is very shy, passive and affectionate, and looks up to Haseo as kind of a big brother. The opposite of his sister, he puts others before himself. He lacks confidence in himself, and greatly admires his Saku.

Contrary to Sakubo's claim of being siblings, both Saku and Bo are controlled by an eleven year-old boy named Iori Nakanishi (中西伊織). Saku appears to be a 'big sister' personality created by Iori in order to protect him against other people, hinting that Sakubo's player may have multiple personalities or dissociative identity disorder. Iori originally had an older sister named Sakura (桜), but she was stillborn.

A frequent spectator in the Arena, Sakubo is always there to support the Emperor Alkaid, at least until Endrance appears to challenge her.

Sakubo is listed by Yata as one of the Lost Ones, players who were attacked and killed by Tri-Edge causing them to fall into comas in the real world. Her unconscious PC body rests in Yata's headquarters, the Serpent of Lore, alongside Shino and later Endrance, apparently in the hopes that she will eventually awaken as Haseo did.

After being suckered into watching Canard's Guild Shop, "Shop Acorn," Haseo encountered Bo, who was interested in buying a rare accessory for Saku. After hearing the price, Bo realized that Saku had spent all of his money, and that he was unable to afford the item. However, after hearing that the item was a birthday present for Saku, Haseo decided to give Bo a discount, and let him buy the item anyway. Grateful for his kindness, Bo promised Haseo that he'd repay him eventually. He was able to come through with his promise a short time later, when he helped Haseo clear the Guild Master Certification Event by buying another item from the shop.

Later, after watching Endrance's fight in the Arena, Haseo met Saku. Initially mistaking her for Bo, his familiar greeting caused Saku to instantly label him as a "freak". Convincing herself that Haseo was attempting to steal "Master En" from her, Saku attempted to drive him away. Her dislike of Haseo grew even stronger after she watched him swear to defeat Endrance in the arena. Wanting to get rid of Haseo, Saku contacted Bordeaux and hired her to PK Haseo by luring him into a dungeon. Unfortunately for Saku, her plan failed when Bo caught wind of it and warned Haseo's friend Atoli. With Haseo under Moon Tree's protection, and with Endrance refusing her offers for help, Saku could only watch as Haseo entered the Demon Palace tournament, and defeated "Master En" using Skeith. Angry at Endrance's loss, Saku swore eternal vengeance against Haseo.

After his defeat, Endrance sealed himself in a block of ice at the bottom of the Dead World of Indieglut Lugh. Still wanting to protect him, Saku took it upon herself to stand guard over him, and both her and Bo spent a large amount of time waiting patiently at the edge of the lake. During their wait their PC was infected by AIDA, which only served to magnify Saku's hatred towards Haseo, and her desire to protect Endrance. Because of this, when Haseo arrived to meet with Endrance, Saku decided to fight him. Revealing herself as an Epitaph User she called out Gorre. With both Saku and Bo controlling different parts of the Avatar, Haseo had a hard time fighting against them. However he was eventually able to defeat Gorre, and remove their infection using Data Drain. His attack temporarily knocked out Saku and allowed Bo to take control, who calmly let Haseo talk to Endrance.

When Endrance decided to join Haseo's side, Saku and Bo decided to join as well; Bo because of his friendship with Haseo, and Saku because she "wasn't going to let Haseo win". Not wanting to pass up the help of another Epitaph User, Haseo agreed to let them join. To get to know them better, he decided to take them both on adventures. He first traveled with Bo and Atoli to a dungeon, where they accidentally stumbled on a meeting between Negimaru and a group of PKers. And later with Endrance and Saku, where Saku attempted to steal back Endrance's affection. Though their relationships with others were sometimes strained, Saku and Bo nonetheless became honorary members of Project G.U. and began helping out in the fight against AIDA.

Sakubo is a Shadow Warlock, a class purely focused on dealing damage through elemental spells, which makes them highly effective against pretty much any enemy, as most of them will have an elemental weaknesses. Those spells often deal multiple hits, which makes easy to build up Rengeki.

Being an Epitaph User, Sakubo can acquire a Lost Weapon during Volume 2 by collecting Adler's Keys: a rare Grimoire called "Infinite Spiral" (which is renamed to "Eternal Light" once evolved to its final form), which not only grants huge bonuses to all elements, but also increases attack spell damage and elemental hit rate by 25%.

Stat-wise, Sakubo has the second lowest physical defense (tied with Gaspard) after Yata, but high magic attack and defense (although their magic attack is the second lowest of all spellcasters). They also have the third highest SP after Shino and Atoli, as well the highest Dark Element stat in the game (meaning they are very proficient with dark-based spells). 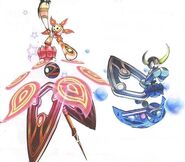 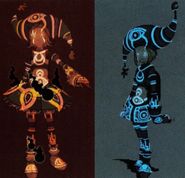