It doesn't matter where you meet them, a friend is still a friend!Sakisaka

Sakisaka has a rather odd looking avatar. He is a very tall man of indeterminate age dressed in dark green leather armor. He wears a short brown cape and carries a round shield on his back. His face is the most distinctive part of his character, he wears an onion shaped helmet with goggles. Depending on his mood the goggles can flash different words or symbols at his command. When fighting, he summons a green bayonet, which he wields as a sword. Unlike most characters, he does not appear to have a visible wave symbol on his body or clothing. His character model however is rather common as multiple PCs are shown using it in the GU games.

Sakisaka has an interesting personality, he is very fond of using puns and other word games in everyday speech. He is generally a friendly helpful person, but he can also be very jealous and shows signs of having a bit of a temper. To those he considers friends he is one of the most helpful people you could meet, but to people who have offended him he is almost impossibly disagreeable. He is closest to Tabby who considers him her role model.

In the real world Sakisaka is a 19 year old man named Shinnosuke Sakamuki. He mentioned once that he lived in a cramped apartment with few windows.

Sakisaka had been a member of the Twilight Brigade since its first incarnation. Sakisaka loves a good mystery so he's tagged along all this time. At the start of Roots, he is a very energetic carefree fellow who enjoys what he's doing. Once Tabby joins, he is to be her guardian and training partner, while the other newcomer Haseo is allowed to train exclusively with Shino and Ovan. Sakisaka doesn't appear to mind much at first, but his feelings eventually become distorted by jealousy. When the Twilight Brigade begins to be hunted by Ender, a very high up member of TaN contacts Sakisaka. Sakisaka goes to see what the fellow wants.

The man in question is Tawaraya, head of all trades of TaN. Sakisaka is lured by his offer and takes the Virus Core that was offered by Tawaraya. Meanwhile, Haseo is blamed for Sakisaka's actions against the guild, which, makes him feel guilty. On a routine hunt for Virus Cores, Sakisaka and Tabby are attacked by Ender. Haseo responds to Tabby's mail and heads there immediately, arriving just in time to stop Ender from PKing Tabby. Ender reveals Sakisaka as the real traitor, who makes a vow then and there to cut off all ties with TaN.

Following these events Sakisaka returns the Virus Core back to Tawaraya. With no doubt left in their minds, their search for the Virus Cores pick up at an alarming rate, to the point where they are able to access the secret of the Lost Grounds. A large battle ensues between TaN and the Twilight Brigade. Sakisaka goes to retrieve the last remaining Virus Core from Tawaraya, whom after defeating Sakisaka a number of times, gives it to him for free. Sakisaka rushes back to the Lost Ground and gives the last Virus Core to Ovan, whom proceeds to go to the secret fortress in the sky, where the Key of the Twilight was said to reside. Ender calls off her troops and leaves, leaving a very confused Twilight Brigade left. After a while of waiting they all leave the ground, after Haseo's investigation yielded nothing. Ovan had disappeared as far as he could tell.

Then the worst news for him came, the Key of the Twilight did not exist, according to Shino. To Sakisaka, Ovan was not coming back to the guild, though he was constantly logged in. With hope diminished, he eventually lashed out at Shino, complaining to her about Ovan's disappearance. She disbanded the Twilight Brigade shortly after. Tabby and Sakisaka hung out for a while, then decided to create their own guild. A real life friend of Sakisaka's asked him to go over to another popular game called "Riot Gun". He tells Tabby and asks her if she would like to join him, she declined his offer and he apologizes for leaving her so abruptly, Sakisaka tells her to do her best and proceeds to quit the game.

Sakisaka returns to the game in Returner, receiving an e-mail from Ovan and coming to Hidden Forbidden Festival. He reunited with Tabby and was dragged with her all around looking for treasure and Ovan. They eventually reached a treasure chest that ended up containing the remnants of AIDA. 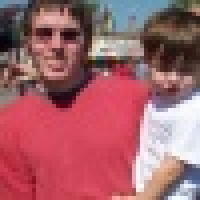