.hack//Roots is a 26 episode prequel anime series to the .hack//G.U. games, released under the Project .hack Conglomerate.

In 2015, a fire destroyed most of The World's game data. CC Corp quickly began work on a replacement, splicing together the remaining data from The World with another game they were working on to form The World R:2.   The plot focuses on Haseo, a newbie Adept Rogue in The World R:2. On his first day playing the game, he is PKed, but gets rescued by the mysterious Ovan, who tells him that he's special, and that he needs to become stronger. The beginning of the series focuses on Ovan's interaction with Haseo, as well as the rivalry between the members of Ovan's guild Twilight Brigade, and the huge guild TaN run by the player Naobi. It later follows Haseo's hunt for the elusive PK "Tri-Edge" and shows what happened to Haseo in the eight months prior to his appearance in .hack//G.U. Rebirth.

Bandai Visual and Bee-Train started broadcasting .hack//Roots on TV-Tokyo, Wednesdays at 25:30hrs on April 5th, 2006. .hack//Roots is the first animated series to be broadcasted in HDTV (1280x720), this version is only aired on TV Osaka.

DVD volume 3 of .hack//Roots was released stateside on August 7th, 2007. A Special Edition was also made available which contains the DVD and a .hack//Roots iPod holder.

DVD volume 5 of .hack//Roots has been released in the US. Only 4 episodes are on the DVD. The cover's yellow and features Pi and Yata as shown on JP DVD 6.

In Europe, .hack//Roots was released by a now defunct company known as Beez Entertainment that specialised in Bandai anime products. They released 6 Individual DVD releases and a Complete Collection box set. The first two volumes of the Individual DVD releases, had Special Editions which both contained exclusive goodies (e.g. Soundtracks and Booklets about the show).

On December 22th, 2010 Bandai Visual released a box set of the series in Japan under its "EMOTION the Best" label. Despite the series being broadcasted in HDTV in Japan, both the Japanese and the U.D. DVD editions were issued in 480i.

The opening theme is "Silly-Go-Round", by FictionJunction YUUKA. The ending theme is "Ruined Country Awakening - Catharsis", by Ali Project. 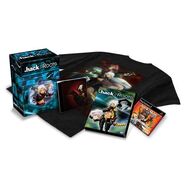 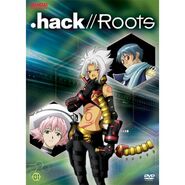 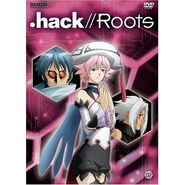 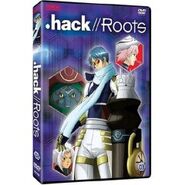 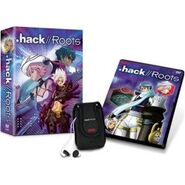