A Race (種族) is chosen along with a class when creating an PC in The World R:2. Each race is a part of the story of The World, and, as with classes, each race influences a character's beginning stats.

"They are an ancient race said to be the true descendants of the elves. Many humans have a tendency to look down on the beast tribe because of their primitive way of thinking and technology. The animosity between the two races has caused strife in the past. All humans have very average abilities (parameters) and are capable of doing just about anything. They are highly adaptable and able to handle all kinds of obstacles that come to them."
— The World R:2 Official Site —
Humans (人族) come with many different appearances in the game, and have average stats. They have developed technologies such as Steam Alchemy.

"Beasts are a race of creatures with the body of a human, and the head and tail of an animal. They place a high value on the technology and culture from ancient times, and tend to resist innovations. As a result, steam technology has yet to spread in their cities. Beasts are separated into three tribes that are differentiated by their appearances and abilities (parameters). Although beasts possess amazing abilities and skills in some areas, they are also often extremely vulnerable in others. They pose fierce united fronts with their tribe to overcome these vulnerabilities."
— The World R:2 Official Site —
Beasts (獣人) have three tribes:

"Beasts of the Ya Tribe have fairly large bodies.Although they have bodies of steel that are capable of resisting physical damage, they have limited understanding of magic and are very vulnerable against magic attacks."
— The World R:2 Official Site —
Ya Tribe Beasts (ガ族) appear large and intimidating, boasting high strength and defense. However, they have low magic defense and attack stats. Their name comes from the Chinese word for "fang" (牙).

"Beasts of Lei Tribe possess bodies that are similar in proportion to humans and have the quickest reflexes and speed. They have average physical and magical abilities similar to humans, but are slightly less resilient."
— The World R:2 Official Site —
Lei Tribe Beasts (ライ族) - Although Lei Tribe Beasts usually have the size and shape of human characters, they tend to have canine or feline appearances. Lei Tribe Beasts have high speed and agility, but poor defense.

"Beasts of the Tu Tribe are smaller than the others. They are highly sensitive and possess great magical abilities and wisdom, but their bodies are much more fragile and they pose almost no resistance to physical attack."
— The World R:2 Official Site —
Tu Tribe Beasts (ウ族) are small animals in appearance. They have limited defense and strength attributes, however, their magic attack and defense are are very high. All members of Medic Union use this race. Their name comes from the Chinese word for "hare" (兎).

"Vital Vistas are machine dolls created by steam technology and are treated as domestic servants by humans. They have high dexterity and are capable of operating complex devices that even humans have difficulty with. They are also equipped with self-awareness equal to a child and are able to judge matters on their own. Recently, some Vital Vistas have come to possess self-awareness very close to humans. They have become self-sufficient and started to disobey commands issued by their masters. Some now live independently in towns and have jobs. More and more humans are now worried that eventually the Vital Vistas will revolt against them."
— The World R:2 Official Site —
Vital Vistas (蒸気人形) are dolls made by humans. They are powered by steam, with varying degrees of consciousness and intelligence. These NPCs act as shopkeepers and quest characters. They have black, featureless faces, and are shorter and rounder than humans in stature.

"Elves are a race that died out long ago.They are said to be the ancestors of all humans and beasts."
— The World R:2 Official Site —
Elves were the ancestor race of both Humans and Beasts, and were responsible for building many of the ruins that can be found in the game. They were said to have been a race with near paragon features and traits. Cursed by the gods, the Elves are now extinct in definition. Humans and Beasts live on as their spiritual successors and descendants. Grunties live on as the goodness that was removed from the elves.

Other races exist, such as Chim Chims, Grunties, and Lucky Animals. 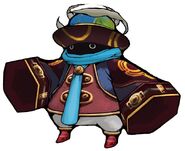 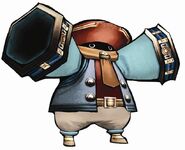 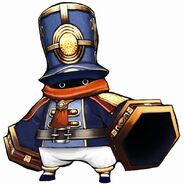