This is a list of prototypes of the Project .hack and .hack Conglomerate series.

PlayStation 2
Originally a "Theft Game" designed by CyberConnect2, later known as "Great Thief Forteprotze", transformed in a game known as "Moon Crow" following a Treasure Thief and further developing into a game about hackers, giving creation to the game "Treasure Hacker (トレジャーハッカー)" which became .hack.

During the late 1990's, having expectations for a new project Fuyuki Nishizawa (西澤冬樹) from Bandai contacted the company Cyber Connect Co. Ltd led by its previous president Shinjiro Sugitani (杉谷伸二郎) and their team, seeking to get into developing software for the PlayStation 2 with a new game. [1]. "Great Thief Forteprotze (大泥棒フォルテプロッツェ)" as described by Hiroshi Matsuyama (松山洋) involved a large city in London where the people living there were controlled by AI and involved the concept of a main character who wanting to "have a life, a habit, and to live a life", chooses to become a thief out of amorous. [2] However Bandai not believing that the project would become a big hit and that the city was lacking life, the story was redone as "Moon Crow (ムーンクロウ －月鴉－)". As a concept Moon Crow was described a world view with more life but a story needing more for the player to relate to [3]. This is also where the main character's name first becomes Kite, the same name as the protagonist of the first .hack series.

Later on with online games at the time becoming more popular such as those on the Dream Cast and PlayStation 2 such as Phantasy Star Online, Fantasy, Ultima Online [4] Lineage, Ragnarok Online [5], and Diablo Hiroshi Matsuyama armed with the idea of having the protagonist serve as medium for the player themselves, and having the characters they meet in the game also appear as someone also alive, the concept later evolved into a game about having "another life experience" and became an RPG based on online games, made for people who are interested in medium but didn't have the environment to play them it, while simultaneously also aimed at players who have MMORPG'S and would think "oh there is such a thing" [6] Treasure Hacker was born at an end of the year event in 1999, with concept art by WAKA (Takayuki Isobe - 磯部孝幸), technical specifications shown sometime around March 1999 and additional work from Hiroto Niizato (新里 裕人) who'd came up with the theme about hackers[7] sometime prior to its development as treasure hackers. The story involved an adventure in the game to solve an incident in real time with the online game The World.

Following this meeting Bandai later on received new Company Director Shin Unozawa (鵜之澤) and began aiming to create titles based on per-existing content and feeling that they were still seen as a new game maker and halted most of their original titles except those at Cyber Connect 2. As a whole with the additional blessings of the previous Company Director Bandai was still very interested but wanting the idea to become more successful, Bandai asked Cyber Connect 2 to consider reworking the project where it was later re-proposed back to the company, along with help from Bandai Producer Daisuke Uchiyama (内山大輔), who helped managed the project across multiple mediums as the multimedia Project .hack [8] which had been split into different media by Bandai (an idea suggested by Unozawa and Uchiyama but also including various teams) to help with the project; alongside scripts from Kazunori Ito (伊藤 和典) and Kirin Mori [9] as well as new character designs from Yoshiyuki Sadamoto (貞本 義行), who later join the project after being shown a perfect 3D model of Rei Ayanami from Evangelion [10] , The anime Sign (Broadcast April 3, 2002) would show what happened six month before the game, the game would end Infection, and the manga Legend of the Twilight Bracelet (Serialized Feburary 2002) that came after that would continue the story four years later. According to an interview with Hiroshi Matsuyama from Dai Kohama (translated by Japanese Correspondent Nick Des Barres) plans for .hack//G.U. also began during this time circa October 2002, around a year for the story and character designs, with actual development continuing in 2003 along with another two years sometime from 2002 for the engine and system for all three games. As time passed Hiroshi Matsuyama would preview these concepts in s short story titled "Super-Hot Game Version!" inside each volume of the Legend of the Twilight manga.

In the story, Kite and Balmung are battling each other and in an attempt to gain victory, Balmung unleashes a level 13 Omega spell, however he is still defeated. The Kite in the story is believed to a prototype of the one that later appeared in the G.U. series, as hinted by Balmung’s reference to Kite’s title; "Oh that’s right. I was defeated... By that Azure Flame," and his final words before being Data Drained are "This man... That Kite! Not Him…!" In addition, the Kite in the story bears a resemblance with Azure Kite. The phrase “On to G.U.” appears at the end, an indication of future games. However, this was not translated by Tokyopop. .hack//Link was later developed circa 2009 with pop culture in mind. [11]

An image at the end of .hack//XXXX vol 2. The image features a version of Kite in stitched clothing and long hair. In his right hand there is a short blade with the text "Empty Skies" written on it. He strongly resembles Azure Flame Kite. The words following read on to "The Chup Chop Incident".

Incidentally, this background image is a random image from the non-existent manga ALTIMIT XX which .hack//XXXX is simultaneously related to and disconnected from. (CC2: Matsuyama)"

Following October 2002 during the development of vol. 3 - 4 of the original .hack games, project g.u. began as a sequel to the series. Then sometime later a trailer released by CyberConnect2 in 2004 for a prevate event that previewed the upcoming G.U. Games. The trailer follows the same general outline as the later E3 one, starting off with a fallen Haseo recently PKed. The screen then flashes to a desert with Haseo standing atop a cliff staring down at a group people attacking another player. The player is PKed, and then Haseo makes an entrance. The group directs their attention toward the challenger, but Haseo pulls out his weapons and battle ensues. Throughout the battle the original designs for each Epitaph User along with their title appear on the screen. The scene ends with Haseo pulling out a scythe. Afterwords, the trailer proceeds to the Cathedral. In the Cathedral, the Aura Statue remains still wrapped in eight chains. Haseo walks up to the pillar, looking up in remembrance. Prototypes of Shino flash across the scene. Soon after, Haseo then turns to leave, when suddenly the tone is heard and an electrical surge passes down. Haseo redirects his attention to the occurrences behind him; Azure Kite appears in a fury of azure flames. Kite’s weapons extend into three blades, and a Sign is shown over the screen. Haseo withdraws his blade and battle begins. Haseo attacks with all of his anger, constantly changing his weapons during the fight, yet the entire time he is unable to break through Kite’s defenses. The result of the battle ends with Kite lifting his arm and performing Data Drain. The trailer flows through a brief recap of the characters before shifting to back to Haseo, who is standing in Avatar Space while holding his head. Thunder then passes across the screen and Skeith in his original form manifests behind Haseo. Haseo's vision fades and logos pop up promoting the series. The trailer ends with Ovan reaching his hand out to a fallen Haseo voicing the Japanese quote "Welcome to the World."

Each volume of .hack//G.U.+ includes a short comic. After being hit by a powerful blast, Haseo is severely damaged. In the story he is missing the left half of his body. He gives up but a mysterious voice encourages him otherwise. By the second chapter, despite Haseo's injuries, the voice states this fight isn't over yet and begins operation. In the third chapter, Ovan appears. He is telling himself that he had forgotten something. He hears his name and remembers. Ovan looks up to see Haseo. There is an additional image at the end of .hack//4koma. It shows both Haseo and Kite sharing similar features, such as their eyes and teeth.

BlackRose was planned to appear in Vol. 3 however there were complaints that she was too unchanged. BlackRose was in the middle of a redesign. This work was stopped mid way due to time constraints. Her design later appeared in .hack//Link. 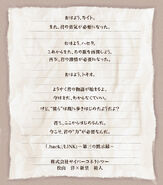 Good morning, Haseo.
Start your journey once more. Your fury is needed again.

Your story is finally about to begin.
It's okay if you still don't understand. But, it seems like "they" have already set out?

You too, start here.
Now is the time that your power is needed. 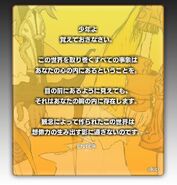 All the phenomena that envelop this world
Lie within your heart.

Even when something seems to be right before your eyes,
It exists inside you.

This world, made of ideas
Is nothing more than a shadow sprung from imagination.


WHERE?!
Where did I make my mistake?

Was it since the theodolite (measurement)?
Where did things go wrong?

Cubia's (The Anti-Existence's) City Hunter (Pursuer).
That's where the bias... And ever since then

Then that means Tokio...
The whole time... It can't be It's almost like he's a