Posaune resembles a clown. His outfit is colored in pink, violet, and white. He wears a strange crest around his neck. He has sky-blue pearls on his outfit, which may or may not hold special powers. He wears a maddening look on his face that includes a sinister smile, merciless eyes, and white skin.

He is unfair, and plays the role of a trickster well. When Tokio begged Haseo to snap out of his illusions, Posaune teleports Tokio away in order to prevent the hero's meddling, so that he can completely manipulate Haseo's feelings and memories. He is insane and enjoys watching others suffer, including Tokio.

Posaune's player is named Masao Yoda (依田雅生), aged 23 at the time of Link. He lives in Tokyo and his occupation outside of Schicksal is unknown. He's actually a very serious person, despite his appearance and fake accent in the game. Like many members of Schicksal, he is a patient of Fluegel's. From an early age he was a day-dreamer and a pathological liar, although he wasn't self-aware of it. When he was in college (age 19) he started playing The World R:2 and made a name for himself as the Chaotic PK "Miku the Liar" but was PKKed and removed from the Blacklist before Haseo started hunting Chaotic PKs. Troubled in his daily life by his compulsive lying, he eventually met Sogabe. Part of his treatment involved a Schicksal PC, which helped him to get his condition under control to some degree. Now part of Schicksal, he specializes in scouting missions and tailing.

Posaune appears above Lumina Cloth and manipulates other players into attacking each other, reveling in the chaos he creates. His prime target is Haseo, who Posaune locates during his encounter with Tokio. Posaune, aware that Tokio appears to have a dangerous latent ability, teleports Tokio to the Arena entrance while he modifies Haseo's PC and memories, replacing the image of "Tri-Edge" with that of Tokio. In this way, Posaune manipulates Haseo into fighting Alkaid in the Arena to draw out Tokio.

During Haseo's battle with Panzer Saika, Posaune modifies Alkaid's PC as well and adds her to his stable of fighters. The team of the modified Haseo and Alkaid continue to fight in the Arena under Posaune's bidding and are able to draw out Tsukasa. Although Azure Flame Kite appears to save Tsukasa, Posaune helps to defeat him and takes him into his group as well. 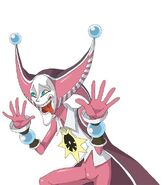 Posaune teasing his enemy before fighting.
Community content is available under CC-BY-SA unless otherwise noted.
Advertisement