The main character of G.U. Games, Haseo is a player branded with another derivative term: PKK (ビーケーケー, Pī Kē Kē) or Player Killer Killer, one who specifically hunts and kills others who maliciously kill players.

Player Killing before the .hack games

The short-story .hack//Firefly, included in AI buster 2, details an encounter where the character Hotaru is surprised by a group of PKs before being rescued by his companion, Sanjuro.

The version(s) of The World as seen in the original .hack//SIGN series portray PKing as being legal, but frowned upon. A prominent character in the series, Sora, has become something of an outlaw after his repeated attacks on other players, which leads to his rivalry and subsequent battles with Crim, and Silver Knight.

Although CC Corp does not actively pursue PKs, they support the Crimson Knights, an organization dedicated to maintaining order in The World. This portrays The World as being largely player-governed, a policy that many MMORPGs adhere to, at least in part.

Player Killing during the .hack games

In an unspecified update before Kite's foray into The World, Player Killing was removed, and CC Corp's involvement in the order of the game has clearly become more active.

Player Killing in .hack//Legend of the Twilight

In both adaptions of Legend of the Twilight, Player Killing makes a return. This feature is able to be used by or against even System Administrators, as shown when Shugo's party is assailed whilst attempting to enter the Net Slum.

In the .hack//GU series, the original server-side software for The World has been lost, but a new game has been reconstructed by merging the surviving code with another game that was in development at the time. This new title, dubbed The World R:2, is borderline lawless; where PKs and PKKs run rampant, dominating the gameplay.

Shino, a friend of the main protagonist, Haseo, becomes a Lost One after her avatar is killed by the Legendary PK Tri-Edge. Haseo, hellbent on finding answers, begins to track down PKs, pressing them for location of her attacker; before slaying the clueless. This behavior eventually leads to his nickname "The Terror of Death" as he gains reputation as a powerful PKK.

The most notorious and skilled Player Killers are given the rank of Chaotic PK. These PKers are placed on a special blacklist and other players can attempt to kill them for bounties; this blacklist is provided by a Vital Vista in the Mercenary District of Mac Anu as part of the Bounty Hunter Campaign. 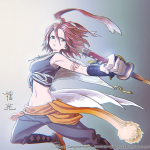