"What was that? When, did I suddently fall behind you?"
— Orgel —

Orgel (オルゲル, Orugeru) is a member of Schicksal in The World R:X. He is ranked No. 5 in the guild.

Orgel wears a headband and loose clothing; he is shirtless, but wears a vest. His arms appear to be either armored or cybernetic. However, he is perhaps best identified by the huge gatling gun he carries with him.

The player behind Orgel lived in America.

When Schicksal's members meet at their hideout, Orgel almost gets into a fight with Metronom over his nagging, but is stopped by Cello. During this exchange, Metronom mentions that Orgel's PC hasn't changed yet; Orgel's response seems to imply that Metronom's PC hasn't changed either. 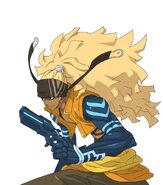 Orgel attacks in his Berserk Form.

Orgel's appearance as a giant golem.