"Don't feel nervous. We just want you to get used to The World quickly so you can enjoy it."
— NOVA —

NOVA was the first character that a newbie BlackRose ran into when playing The World.

NOVA is a fairly experienced player. He knows a lot about what is going on inside the game, although he lacks any real info on the things happening behind the scenes.

Aside from playing The World, he is also a giant anime fan and is learning how to speak English. When dealing with annoying people, he will occasionally insult them in English while pretending to "try out his accent."

Seeing BlackRose struggling with the controls, NOVA and his partner Chimney taught her the basics of the game, and were the first people to exchange Member Addresses with her. He would group with her several times as she gained experience inside the game. 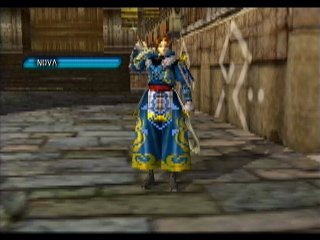 Retrieved from "https://dothack.fandom.com/wiki/NOVA?oldid=37837"
Community content is available under CC-BY-SA unless otherwise noted.