"It was the same with me. Many of my fondest memories are of playing that game."
— Mistral —

Mistral (ミストラル, Misutoraru) is the first player that joins Kite and BlackRose. She has a tendency to burn meals because she plays The World while cooking. She is happy to tag along with Kite, but she remains a bit unaware of the true nature of The World until later in the story.

Mistral has short pink hair, red eyes, and a distinctive cat tooth. She wears heavy Wavemaster robes that are white and light blue. Each side of her hat attaches to yellow/gold ribbons that flow down to her ankles on both sides. She has a similar-looking ribbon tied around her waist.

Mistral has a goofy and fun personality and likes to cheer her team on. She likes hanging around Kite because of his special ability, and wants to see it as much as she can. Mistral's pleasant attitude goes with her wherever she travels in The World. She may appear childish, but her true self is reliable and dedicated.

Mistral's player is Mayumi Kurokawa, a married woman in her late 20s, a sharp contrast from her childlike persona in The World. She does some unspecified type of admin work. She seems to be working at home while on maternity leave during Quarantine. Despite her burnt culinary disasters, Mistral is actually a decent chef when she can focus on her cooking. She also happens to be an expert grocery shopper, always finding the lowest prices for the best products. She lives in the Oomiya ward of Saitama City, in the Saitama Prefecture.

Mistral has a sweet tooth that would drive a dentist insane. She loves candy. Chocolate Jelly Beans are one of her favorites, although she regrets missing the chance to taste urchin jelly beans. She once commented to Kite that she was afraid that all her chocolate consumption was causing her to grow fat. However, at the time, she might not have been aware that she was pregnant. .

Mistral joins the party because she happens to see Kite use the Twilight Bracelet on a Data Bug at Δ Expansive Haunted Sea of Sand. She tags along hoping to see him use it more. At one point, Kite enters Dun Loireag, and finds Mistral haggling with Apeiron over an item he has. He requests a decent sum of GP. Mistral runs off to collect the funds, and Apeiron offers the book to Kite for a significantly lower amount. When Kite points this out, Apeiron simply gives him the book in frustration, and leaves. Mistral returns, sad to find that Apeiron already left. Mistral then invites Kite along to a field at Θ Collapsed Momentary Spiral, hoping to see him use his Bracelet.

Mistral first begins to become aware of the dangerous nature of The World when she accompanies Kite in his first battle against Cubia at Λ Merciless Grieving Furnace. Kite had tried to explain the true situation to her, but she simply thought he was talking about an in-game event, and wanted to tag along for fun. Right before the battle with Cubia, Kite's bracelet reacts, and causes an incomplete Aura to appear before them. The scene disturbs Mistral a bit, and they are immediately drawn into a fight. The battle causes her to realize the actuality of what is happening in the game.

Not too long afterward, she reveals to Kite that she's actually pregnant in real life, and decides to leave the game for the safety of her unborn child. However, in order to protect The World for her child to enjoy as well, she later returns to the game in time for their final battle with Morganna.

Mistral is a key member of Kite's party, helping him in his fight against Skeith. Though she mostly takes a background role, Mistral is always there to provide moral support to the other members of Kite's team and will not hesitate to defend them from harm. BlackRose sees her as a big sister figure, and frequently comes to her for advice, usually regarding Kite.

Mistral appears several times throughout Another Birth. She accompanied Kite and BlackRose to the field Θ Cursed Despaired Paradise, where they found a bedroom filled with bears, fragments of Harald's notes, and a portion of the Epitaph of Twilight. BlackRose initially disliked Mistral, thinking that her cheerful personality was faked, but she eventually warmed up to her. Later, Mistral forces her way into the party and traveled with Kite and BlackRose to Θ Chosen Hopeless Nothingness where she helped them fight against Skeith.

BlackRose got closer to Mistral when the two began exchanging e-mails with each other. BlackRose eventually came to see her as a sort of big sister, and frequently came to ask for her advice. After awhile they began to tell each other information about their real selves, making their relationship even closer.

Right after Mistral tells Kite about how she is leaving the game due to her pregnancy, she sends BlackRose an e-mail. Within the e-mail she requests to meet BlackRose. Eventually they do meet and with that become even more close than their already budding sort-of-second mother/daughter relationship was before.

To BlackRose's surprise, Mistral returns to help after Lios's men are sent into comas. Mistral helps Kite and BlackRose hunt for the Virus Cores necessary to find Harald and is their third party member when fighting Cubia for the final time. Despite her desire to stay by their side to the end, Mistral is sent to the sidelines by Balmung, who knew she was pregnant and was concerned for her safety.

After Morganna's defeat, Mayumi Kurokawa meets with Akira Hayami and a number of the other .hackers offline in a café.

Mistral finds herself running late for the planned meeting, and is rushing her way out of a dungeon with her treasure. Outside, she is ambushed by Sora, who in typical Sora style, requests her Member Address on the threat of being PKed if she does not comply. Silver Knight and Crim step in on Mistral's behalf. Sora decides the odds are suddenly against him, and leaves with a bit of disappointment. Afterwards, Mistral heads to the tavern with Crim and Silver Knight, where several others are waiting. From there, they all proceed to Net Slum, where Helba has a special celebration planned. Mistral happily runs off to dance.

When Mistral retires from The World, she gives her avatar to her daughter, Mirei. Mirei then changes the character name to Mireille at the Change-the-Name Event.

.hack//Legend of the Twilight (manga)

In Legend of the Twilight, the affectionate, motherly side of Mistral is shown. It seems that Mistral has quit her old job to become a housewife and be with her daughter. It is discovered that Mistral is Mireille's mother, when late in the story, Mistral offers her daughter some comfort when she sees her crying at the computer. Mistral asks to borrow her old avatar for a little while, to help an old friend from the game who contacted her. Mistral helps organize some help for Shugo's group, and when Kazu shows up to help, he mistakenly calls Mireille by her avatar's old name, Mistral, confirming that Mireille's character is the original Mistral PC with a name change.. After everything is over, and Mireille has gone to bed, Mistral and Balmung discuss the recent events while walking through Net Slum, though she does not reveal the switch in players at first, letting Balmung believe he's talking to her daughter at first until she calls him Bal-tan, at which point he asks if and she confirms Mieille has fallen asleep. 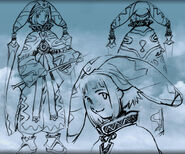