Interest in Aina has diminshed upon being told she is Ovan's sister.

My interest in Aina revolved solely around the speculation that she was the new Aura. Since I now have a lot of material saying that isn't that case, I'm no longer as interested. Rpg 04:58, 23 January 2007 (UTC)

Some people like to keep to the old favorites like the awesomeness that is Aura. Now get the fuck out.--Ellimist 05:03, 23 January 2007 (UTC)

I've been watching all GU information closely for any and all hints of Aura. I now have what I want. Also, I forgot I converted ellim...I need to change my page. Rpg 05:14, 23 January 2007 (UTC)

User:Male Wavemaster Enzeru: Aura disappeared cause she was treated as The World's god. She reappears at the end of G.U. Vol. 3 and goes right back to sleep. This Wiki's picture of her in GU is ugly. Check her page. Sorry for editing your page.

Too bad that's the only Aura image we have. And it is NOT ugly. Oh and one final thing, be prepared to suffer RPG's wrath now because to him, NOTHING involving Aura is ugly.--Ellimist 00:30, 31 March 2007 (UTC) 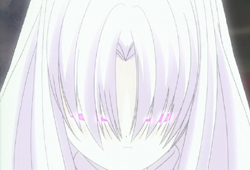 Pretty sure it happened after you joined. Read the Chronicles topics in the Fanfiction board NAO!

Gimme something to do. Edit

I haven't been too active, but I can't think of anything to work on honestly. I'm willing to undertake any tasks within my power that need addressing though. My pursuit of perfect for the Aura page has been somewhat set back by a lack of free time to read through new material that may be relevant. I'm willing to add information where there are gaps, or add art where we are lacking some. I do have a good pool of resources to use. I haven't forgotten about this place, but since Otaku is looking for activity, I'm making this offer. --Rpg 22:44, February 19, 2010 (UTC)

Um update the appearance section(s) for Link. Vote on the Monaco vs. Monobook debate, tell me who the black haired woman is from the epitaph of twilight novel? Outlaw630 01:10, February 20, 2010 (UTC)

Do you have something against me or something? I n one fell swoop, you undid almost every edit I ever made to the Aura R:2 artical. I liked some of those posts (particularly of Aura's maturity, psycological state and her attitude in TRILOGY) It's not like they're irrelivent subjects, seeing as there are appearance and personality changes. --Falcon At 02:46, March 16, 2010 (UTC)

It's RPG. He'll protect Aura's pages any way he can. If he doesn't like it, he'll remove it. I do the same thing for my Terajima pages. Your edits just seem to put the pics in awkward positions. Anyways, I like how RPG is dedicated to it, since I know that the Aura pages will be at least somewhat protected from crappy edits. Kulaguy 02:51, March 16, 2010 (UTC)

No personal vendetta. I paid no regard to who wrote what. I basically lopped out anything that was overly worded (better or equally said with less verbage), poorly worded, speculation, opinion, or weakly based as well as grammar and/or spelling mistakes where I saw them. I even redid things that I know I wrote in the past. I went through the entire articles word by word. I was not looking for things done by specific users. I simply wanted to overhaul them into the best shape I could determine them to be so that it'll all mesh together nicely as I work on LINK. --Rpg 02:52, March 16, 2010 (UTC)

I was just jokiing above, but I just want to know if those things I mentioned can make the cut for the RPG-certified artical. Anyone can delete. It takes a real fan to be able to acorpriate everything into the artical.--Falcon At 11:04, March 16, 2010 (UTC)

Can you please explain the reasoning behind those three I mentioned? I can't stop thinking about it otherwise and I would like to be on the same page with the watchdog of one of my favorite pages.--Falcon At 18:56, March 16, 2010 (UTC)

I dropped the cynical part because it was weakly based. We had no sort of facial expressions to go by, so her comments could have been anywhere from cynical to simply informative. There wasn't enough to the scene to analyze it on that level. I dropped the maturity part because Aura's apparent visual age has never been apparent. The only times we see her visually mature are when she changes forms completely. You also have to consider that it could have simply been that she was rendered in a different way graphically than we'd ever seen before. As for the end of Trilogy, you even had it in what you had typed. "Inferred" means we have no concrete evidence to support the statement. It's one way to look at it, but there are plenty of other explanations that fit just as well. --Rpg 19:17, March 16, 2010 (UTC)

I put inferred because I don't speak japanese and couldn't judge the tone of her voice. The maturity of her eyes i thought was notable because her eye could have been rendered as young as Atoli's but instead she has older, wiser, sadder eyes, not unlike kaide. --Falcon At 19:51, March 16, 2010 (UTC)

Know your playing the game but may I ask a request? When you reach the .hack//Trilogy section in Link, could explain under that part. I've only seen segments. Also can you determine if the beast of the apocalypse (or however the name is supposed to be) is a different entiy than 2020 Haseo? Outlaw630 03:49, March 16, 2010 (UTC)

I see. Thought they had more forwarding pictures. Then may I have them for personal interests? I like seeing those type of things. Outlaw630 21:43, March 24, 2010 (UTC)

I'm too lazy to register an account to replace it myself, so I'll let you have the glory.


Here is a version of Ping.ogg that was taken directly from .hack//G.U.'s cutscenes. It doesn't sound as "artificial" as the file that's there right now. At least, in my opion. Like going directly to the source, y'know?

A request regarding your awesome card uploads.

Retrieved from "https://dothack.fandom.com/wiki/Message_Wall:Rpg/User_talk_archive"
Community content is available under CC-BY-SA unless otherwise noted.