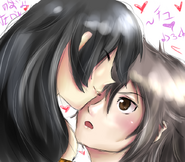 Add a photo to this gallery

Mai Minase (水無瀬舞, Minase Mai) is a high school student living in Kanazawa, Ishikawa Prefecture and is the focus of the first .hack//Liminalityepisode.

Mai doesn't have much experience with video games, and only played The World at the request of her boyfriend Tomonari Kasumi. He created an account and character for her named 'Minase', but it is never revealed what type of character it was. Later she uses "Sieg (2)", a copy of Tomonari's character created by Junichiro Tokuoka.

Mai is a girl going to high school in Kanazawa. She is an accomplished violinist and is famous in her school's music department. Her home life is rather strained. Mai's parents are rarely home early. Her father works for long periods of time, and her mother consistently tries to get Mai to become a violin soloist. Mai was rather attached to her late grandfather, from whom she inherits her love of the violin and knowledge of The Ring of the Nibelung.

At the request of her boyfriend, Tomonari Kasumi, she played The World with him in their school's game study clubroom. Tomonari brought her to the field Θ Chosen Hopeless Nothingness where they encountered Aura and Skeith. They were found collapsed some time later. Although Mai would later awaken in the hospital, Tomonari remained comatose. She later meets Junichiro Tokuoka and joins his quest to find the cause of her and Tomonari collapsing while playing The World.

Mai is unique in that, of the numerous players who fell comatose when meeting Skeith, she is the only one to reawaken under her own power. She also has the unique ability to hear the note "A in C major," when there is a disturbance in The World; she has heard the tones just before encountering Skeith and when The World affected the Yokohama region. It is due to this ability that she was able to break free from The World twice and correctly time when to replace the server Kite and his party were battling Morganna in.

Mai is mentioned several times in e-mails by Kuhn, the PC of Tomonari Kasumi in The World R:2. Through him, it is learned that Mai eventually broke up with him due to his immaturity. In the .hack//G.U. novels, Tomonari mentions that he and Mai had continued dating after high school by email and gradually drifted apart as their interests diverged before breaking up. Mai went on to volunteer abroad in places like South Asia and Africa, while Tomonari remained directionless and living in Kanazawa.

The breakup had a lasting effect on Tomonari, who years afterward, still regrets messing up his only "real relationship". In .hack//G.U.+, he reveals to Pi that he still likes Mai, though she does not seem to reciprocate his feelings. He hopes to confess to her again when he becomes more worthy, though Pi comments that he must be confident if he believes she will still be waiting for him.

Retrieved from "https://dothack.fandom.com/wiki/Mai_Minase?oldid=63354"
Community content is available under CC-BY-SA unless otherwise noted.