"The Lost Weapons are weapons that embody the lost power of Epitaph User characters. To gain these weapons, you will need to offer "Adler's Keys" to break the seals, then defeat the Sealed Beasts that protect the weapons."
— The World R:2 —

Lost Weapons (ロストウェポン) are eight special, powerful weapons found in The World R:2. Lost Weapons are lost fragments of the eight Epitaphs, sealed away in Great Temple of Caerleon Medb after the failure of the R.A. Plan. Protected by The World itself, they can only be unsealed and equipped by Epitaph Users who have collected the required number of Adler's Keys. Having lost some of their power in stasis, however, their full abilities must be regained using Virus Cores, upgrading them to their true forms and fully completing the Epitaphs. 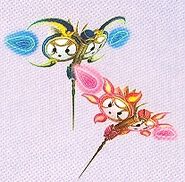