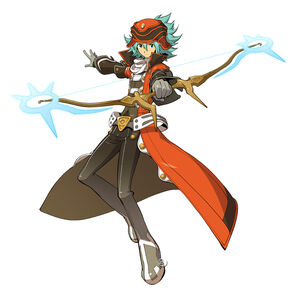 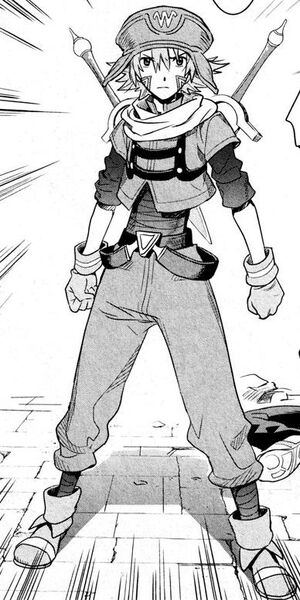 Kite (カイト, Kaito) is a character in .hack//LINK. He is the legendary hero and .hacker from 10 years ago.

Kite is a Twin Blade with red clothes, large hat and blue hair that spikes outwards. He wears short gloves and a textured shirt with rolled sleeves covered by a small vest with a scarf over it. His Wave Symbols resemble two triangle shaped tattoos and is coupled with several belts coiled around his sleeves, waist and legs, strange designs wrap around his pants and in the manga the crest on his hat is changed into a “W”.

During the main series Kite uses a set of dual blades called "Twin Blades of the Hero" (勇者の双剣), but in the manga these change into a pair of triple dual edged blades called "Empty Skies". Kite still possesses the Twilight Bracelet and also displays an array of abilities similar to Azure Flame Knight.

After using enough Virus Cores both wave symbols for Kite disappear. In the Xth form Kite gains messy hair, blue eyes, a red and black hat with a brown vest and a longbow that can separate into a pair of thin dual swords with a light blue edge. He also wears a large scarf, black and white pants, including a double sided belt, white harness, leather gloves and a red and black trench coat with elongated cuffs as well as dark sleeves and the eye of Morganna on the back along with a bracelet on his right arm.

Kite's personality still retains his heroic motives and intentions within The World R:X and his concern for his friends. He still seems to have kept most if not all of his personality from the previous 10 years from The World.

Offline Kite is a fourteen year old boy living in Japan. He is a fan of role playing games, goes to school with his best friend Yasuhiko and owns a ball with "Nissan FC" soccer logo. The World was the first online game he ever played. Kite retired from the game during the year 2011 A.D.

During Link Kite first appears in The Maze of The Final End. After the Twilight Knights are summoned by Aura in 2020 A.D., Kite began to fight against the leader of Schicksal Flügel when another user, Tokio, is caught in the battle. After seeing Tokio, Flügel uses him as a target and shoots Kite in the back. As a result, prior to becoming stone, Kite uses Data Drain against Flügel and explains that The World is not an ordinary game.

After Tokio travels to 2010, he meets another version of Kite from the past who invites him to an area to explain what happened to his friend Orca, when suddenly they‘re attacked by a Data Bug. Kite uses Data Drain, tearing the data bug in half to save them, but meets Balmung, who accuses him of being the same as the virus. Sometime after Kite received an anonymous email, he introduces Tokio to BlackRose and Mistral. Together they discover remains of Harald Hoerwick and later meet with the mysterious hacker Helba. Following this Kite later defeats Skeith, creates an alliance with Balmung, joins forces with the system administrator Lios and eventually takes part in Operation Tetrapod and their final mission against Corbenik.

However soon after Kite becomes frozen by Posaune while pushing Tokio out of the way Morganna’s attack. After taking his body, Posaune challenges Tokio and BlackRose to a battle. Aura assists them in recovering the Chrono Core, but Kite enters a coma and his data remains frozen in 2010 A. D. He is reawakened once Flügel destroys his remaining data in 2010, after Schicksal is double crossed by Geist and Metronom, and then later joins every one after defeating The Azure Knights. From then on Kite continues to work with Tokio and goes on to become a participant in Operation Gear, in which Tokio, Schicksal and The Twilight Knights team up to battle The Queen of Demise after the initialization of Immortal Dusk. The Akashic Records revert to normal and Kite encounters Cubia with Tokio, and befriends Cello and Haseo. Schicksal decides to disband removing the reason for the existence of The Twilight Knights and Kite assembles a final celebration in Netslum prior to permanently returning to the year 2010 A.D.

As with the original incarnation Kite reviews his online experience in Netslum. A year later during his last meeting with BlackRose Kite decides to explore the real world more before continuing to pursue a study in foreign culture and retiring from the game. Kite is last seen assisting Tokio during a rip in the Akasic Records.

Consequent to forming the Twilight Knights Kite began fighting against the members of Schicksal. During The World R:X Kite was facing Schicksal's leader when another user was caught in the encounter. After discovering Tokio is unable to log out of the game a fight ensues. After seeing Tokio, Flügel uses him as a target and shoots Kite in the back, then shoots Tokio however the gun has no effect on Tokio. Understanding the situation Kite uses data drain and reverts Flügel into his previous form. Before he's frozen Kite explains that The World is not an ordinary game and tells Tokio to locate his friends and use their powers to open the Akashic Records and log out of the game.
Because of a separate story premise is it implied that the characters in the comic were the originals however the series was conclude early and moved aside for the game's development before the comic was finished. It is however notable that prior to the comic's release a poem advertising the start of the series, suggest the Kite, Haseo, and others are returning characters.

.hack//LiVE Extravaganza::Event: Arena:Kite first appears in an Arena battle against Haseo. As a reference to an earlier series 4koma Kite is initially willing to surrender however his opponent's distrust of The Twilight Bracelet causes them to overreact allowing him to be defeated.

During the series Flügel is testing a special device under CC Corporation titled Yomitoru X that may permit users ability to read the hearts and minds individuals online. After the device is left with Tokio, he meets with different people including Kite to asks what they think of his horn and test the effectiveness of the machine. However although the device functions Flügel observes Tokio's reactions, the experiment is eventually cancelled and Yomitoru X never reaches commercialization.

Retrieved from "https://dothack.fandom.com/wiki/Kite_(LINK)?oldid=70213"
Community content is available under CC-BY-SA unless otherwise noted.