Kite (カイト, Kaito), later known by his earned nickname Kite of the Azure Flame, is the main character of the .hack//Games.

Kite's avatar is a young, blue-haired boy dressed mostly in red clothing, with a red hat. His wave symbol consists of two tattoos on his cheeks. Originally his character was dressed in an forest green, but after using the Book of Twilight given to him by Aura he gained a unique red attire, and strange designs on his pants. As a Twin Blade he wields two short swords. His main weapons are level one dual blades called Amateur Blades. Though usually invisible, he carries the Twilight Bracelet on his right arm, which allows him to use his Data Drain and Gate Hacking abilities. The Twilight Bracelet is replaced with a lug nut during .hack//GIFT.

Kite is a very straightforward character who is devoted to awakening Yasuhiko from his coma. His cheerful personality has won him many friends inside The World. Though polite to strangers he shows a rather witty sense of humor to those he's close with. He is the type of person who will stop whatever he's doing to help somebody who's in trouble. He spends a lot of his time online with his friend and partner BlackRose.

Kite is a 14 year old boy in his second year of junior high school. In the real world he lives in Japan and goes to school with his close friend Yasuhiko. Kite is ambidextrous. As a hobby he enjoys building models and playing soccer with his friends even though he's not on an official team. A lover of science fiction books, he has read his favorite novels multiple times. His favorite food is beef stew. He's also a big fan of the British Soccer team "Nissan FC" and owns a special ball with their logo on it. Though at the beginning of the series he wasn´t a fan of videogames, he ended up finding his calling in life thanks to them as he wants to study foreign languages to meet people from all over the world.

Kite was originally invited to play The World by his real life friend Yasuhiko. On their first adventure, they ran into a strange girl named Aura. This girl tried to give Yasuhiko's character "Orca" a strange book, but unfortunately a strange monster named Skeith appeared and killed Orca. Skeith prepared to attack Kite, but a hacker named Helba intervened, saving Kite and booting him from the server with the book. Soon after this event, Kite learned that Yasuhiko had fallen into a coma in the real world. Suspecting the cause of his coma was due to his encounter in The World, Kite began investigating.

He soon encountered several players who would help him on his quest. BlackRose, a Heavy Blade would become his closest companion, but others would play a part too, including the mysterious Mia and her partner Elk, the rare item hunter Mistral, the rambunctious Piros, and the calculating Wiseman. Balmung, Orca's partner in The World would also play a part, though he saw Kite as little more than a hacker at first.

Not to long after his friend fell comatose, he had an encounter with a Data Bug at the Hulle Granz Cathedral. The presence of the obviously hacked monster caused the Book of Twilight to activate, transforming Kite's costume and granting him access to the Twilight Bracelet, an object retaining two special abilities: Data Drain, the ability to alter data in The World, and Gate Hacking, which allowed him to break through barriers set up inside of the system.

With this powerful, new weapon, Kite began investigating the strange events plaguing The World, and began to discover clues left by the game's enigmatic creator, Harald Hoerwick. With the help of his allies, Kite began to piece together the true nature of The World. With his friends by his side, he battled against Skeith and the other seven Phases of the Cursed Wave, endured system crashes, and even fought against his own dark reflection, the anti-existence of his bracelet, Cubia. Forming an unlikely alliance between his party, the hacker Helba, and the system administrator Lios, Kite formed the group that would later be known as the .hackers.

Together they penetrated into the very core of The World and brought about the rebirth of the ultimate A.I., Aura. Through his actions and the actions of his friends he was finally able to free Orca from his coma along with the other victims, bringing a golden age to The World.

Wanting clues about what caused her brother Fumikazu to fall into a coma, the character BlackRose latched onto one of the first people she'd met and dragged him to Hulle Granz Cathedral. That person was none other than Kite. The two were attacked by a Data Bug in the cathedral which activated Kite's Book of Twilight, causing the Twilight Bracelet to form on his arm. After realizing that Kite was in the same situation as her, BlackRose decided to ally herself with him. Together they began investigating the problems plaguing The World, eventually leading them to a confrontation with Skeith.

Kite appears in Unison along with his friends Orca and Balmung. They go on a hunt for any Data Bugs that still exist in The World. When they don't find any, Balmung asks Kite if there is any reason for him to still carry the Bracelet. Kite responds that he intends to keep the Bracelet until he discovers the reason why he was given it, and that he believes that it's the duty of the Bracelet's wielder to protect The World. Balmung and Orca agree with him, and soon after go with him to a party in Net Slum, where Kite not only meets the entire cast of .hack//SIGN, but also dances with BlackRose and Mistral.

.hack//Legend of the Twilight (manga)

Kite has only a small role in Legend of the Twilight. Balmung mentions that Kite has recently graduated and is probably busy with job interviews in real life. Wanting Kite to meet Shugo, Balmung E-mails him inviting him to return to The World. Kite accepts his offer and is seen warping into Mac Anu with Orca and BlackRose at the end of the final volume, presumably going to see Shugo and his party.

While adventuring in The World with his friend Orca, Kite encountered a mysterious girl named Aura. Giving a book to Orca, Aura pleaded for help but was interrupted by the arrival of a creature named Skeith. Attacking the unprepared Orca, Skeith easily defeated him, putting him into a coma in the real world. Barely escaping himself, Kite used the book to alter his character data, and began a quest to find out what had really happened that day. Along the way he encountered BlackRose and Mistral, who decided to join his fight. When he eventually encountered Skeith again, Kite was able to defeat him using the Twilight Bracelet, an item he had received from Aura's book. However before he could celebrate his victory, a strange player named Cubia appeared and told him that he had merely won the first battle in a long war.

Soon afterward, Kite found himself at odds with the system administrator Lios, and Orca's old partner Balmung. Though Kite was unprepared for their accusations that he was responsible for Orca's condition, he refused to listen to them and continued with his original path. He was soon able to turn Balmung to his side, and along with Cubia began hunting the Eight Phases of Morganna.

Kite's PC underwent further alteration than in the games. During the first phase of his battle with Corbenik, his Amateur Blades mutated into a new form with longer guards and curved blades - this may have been because of leftover power he received from Cubia after his demise. In addition, as he was going forward to deal the final blow to Corbenik, Aura released her power to enhance his character, causing his PC to look very similar to that of Azure Kite from the G.U. series and further mutating his weapons into the Empty Skies. Most of this latter change wore off after the battle, however, the changed symbol on his hat was permanent.

Kite is probably one of the most relaxed characters to appear in GIFT. Unfortunately he has a hard time finding time to lay back, since BlackRose keeps dragging him around so they can be the first people to reach Helba's secret hot springs. During their adventure they come across the corpse of Orca (actually Bear). Since Balmung was near the corpse Kite assumes that he was responsible, and that he took Helba's words banning role-playing as an excuse to indulge in long suppressed PKing urges.

Soon afterward they travel to another field where they come across Bear (actually Orca) having a conversation with B.T. who informs them that they're having an "adult conversation" and that they should go away. The arrival of Tsukasa and several other SIGN characters interrupts them, and in the ensuing conversation Kite realizes that he can reach Helba's field via Gate Hacking. The "Gift" was a reference to the bracelet given to him by Aura. Things are interrupted when the field suddenly crashes.

Arriving at the hot springs they come across B.T.'s corpse. Since Balmung is nearby Kite once again blames him, ignoring his tearful plea of innocence. The rest of the cast arrives soon afterward, and BlackRose speeds off towards the spring with Mimiru close behind her. Without either of their partners to bug them Kite and Tsukasa bathe in one of the hot springs, creating an awkward moment when Tsukasa admits that he's actually a girl (complete with breasts under his robe). Embarrassed, Kite quickly covers himself with a towel.

Though not initially obvious, Kite is himself the most changed of all characters in .hack//4koma. Although he maintains the image of the kind, selfless hero, this is, in truth, a facade. Kite's "true" personality often shows through, revealing him to be attention-seeking, selfish, asinine and insincere. He shows great animosity towards anyone who gets more attention than himself, and often does whatever he can to bring that person down in any way possible.

Kite has a very unpleasant relationship with Haseo especially, largely due to Haseo's taking the role of main character. The first time they meet he unabashedly throws away the cake Haseo had given him as a welcoming present. Although Kite seems generally friendly while Haseo is around, he often subtly aggravates him either by playing a cruel practical joke or subtly undermining his role as the new protagonist.

A few months after the events of 2010 while Kite and Black Rose are playing in The World when several monster begin appearing in the game, Skeith returns attacking visitors from another dimension, Aura's Statue is bound in chains, Kite and BlackRose fall unconscious in the real world and find themselves unable to log out from the game. And after fixing problems within The World find themselves trapped as their actual characters. Believing that something bad is happening once again. Kite and BlackRose join several characters from other timelines, dimensions, universes and realities to find out reason behind mysterious events occurring across their respective worlds. Sometime after this Kite is involved in a similar event, where he later encounter another the future of his own timeline Haseo.

Kite's face is briefly seen on a balloon Natsume is holding at Δ Hidden Forbidden Festival. 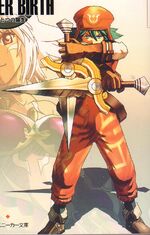 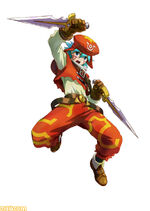 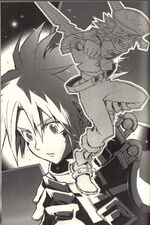 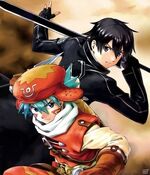 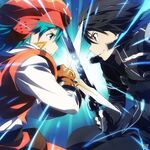 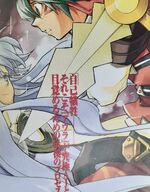 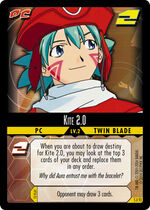