"What will I do with it? Whatever I want. It's the world that must follow!"
— Kazumi —

Kazumi (数見) is a character in .hack//G.U.＋ and the user of the Dummy Morganna Factor.

Kazumi's PC appears as a young green-haired man donning a wide-collared maroon and black cape over a white shirt and black tie, and sharp, pointed metallic gauntlets, connected to hinged, robot-like elbows. He wears headphones similar to the pair worn by the Commentator, and has line markings around his right eye, which is usually closed.

When Kazumi performs Data Drain, his strange, glowing right eye opens and the broadside of his right forearm glows and shoots a beam outwards.

Later, in his "god" form, Kazumi appears naked with both eyes open and mundane-looking. He appears mostly featureless, with the exception of a large flame-shaped tattoo on his back featuring 12 rings: 8 connected in a circle, one in the center, and one above and to each side of the circle formation, similar to designs found in the Hulle Granz Cathedral. He can attack using circuit-like lines of light which also appear as vague "wings", and he stands on a flower-shaped platform.

Kazumi usually speaks very politely, and acts playful and calm. However, this facade hides a psychotic side he takes no shame in revealing when the time is right.

Kazumi was a subordinate of Jun Bansyoya, head of Project G.U. at CyberConnect Corporation. Jun taught Kazumi that there was no future for technology without a heart, and that without the success of Project G.U., events such as the World Network Crisis were destined to repeat. When Jun foresaw that R.A. Plan would result in the resuscitation of Cubia, he burned down the CyberConnect building, destroying the project. Kazumi accused him of betraying their ideals, and the experience changed him. He later became the new head of Project G.U., with Jun's sister Reiko as a subordinate.

Kazumi is a member of the CyberConnect Corporation's Security Administration, assigned to "Safety Division 2," a mysterious section of CyberConnect that Reiko Saeki once belonged to. He appears in the Serpent of Lore to terminate Yata's contract and remove him from Project G.U.. He later approaches Haseo and Aina at the Hulle Granz Cathedral, where he Data Drains Haseo in an attempt to retrieve the Skeith Epitaph. Although he succeeds in doing this, his plans for Haseo himself are foiled by an intervening Zelkova, who transports him away to another location.

Kazumi eventually fulfills his ambition, becoming a "false god" of The World. This success is short-lived, however, as his actions quickly cause Cubia to manifest. Greatly surpassed in strength by his own "shadow", Kazumi appears to be devoured by it. 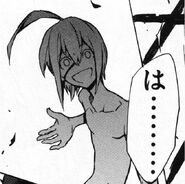 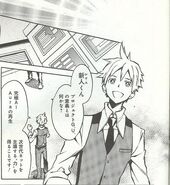 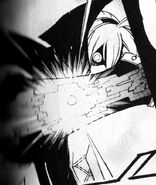