"Face it. An idiot like you isn't qualified to play this game."
— IYOTEN —

IYOTEN is a member of Kestrel. He and Asta taught Haseo how to play The World R:2 and then PKed him.

IYOTEN is a silver-haired man dressed in a tight sleeveless jacket. His hair always covers his eyes and when he fights, a very unsettling grin appears on his face.

IYOTEN is a mid-level PKer in Kestrel. Partnered with his friend Asta, he moves throughout the system looking for easy targets to PK. Since he usually attacks newbies, he lacks the skill to fight against people of equal strength.

IYOTEN is a 19-year-old named Naoya Sakai. He knows the player behind Asta in real life.

Asta and IYOTEN receive a mysterious email informing them that a black Adept Rogue newbie has just logged into The World. They decide to track him down and PK him.

IYOTEN and Asta are killed by Ovan at the beginning of Roots, shortly after PKing Haseo. Haseo runs into them later in the series. They try to attack him, but Haseo manages to defeat them both fairly easily.

IYOTEN and Asta appear briefly in a flashback in G.U.+. They taunt Haseo after PKing him, but are attacked by Ovan who easily kills both of them with a few shots from his steam gun.

IYOTEN and Asta approach the newbie Haseo and teach him the basics of gameplay, but after Haseo claims the treasure, they maliciously PK him before they themselves are PKKed by Ovan.

IYOTEN and Asta can also be seen in the background where Haseo meets Atoli and Sakaki for the first time.

Asta and IYOTEN later fight Haseo in Sakaki's PK tournament, not remembering him at all. Afterwards, they follow Gabi into battle against Cubia's Gomoras at the Coite-Bodher Battlefield, thinking it to be an event created by Zelkova.

IYOTEN makes a brief appearance alongside Asta, during a battle against Haseo. 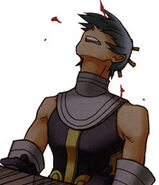 IYOTEN being PKed by Ovan in G.U.+