Hermit (ハーミット, Hāmitto) is a character in .hack//Quantum. A strange character with an illegal appearance. He appears to be looking for something, or perhaps someone.

Hermit appears as a chibi-fied and gender-swapped version of Mia from the original games, though with a hat, which Mia did not wear. He carries a small black stick of unknown origin, which is apparently a cheat item with access to a number of system commands. 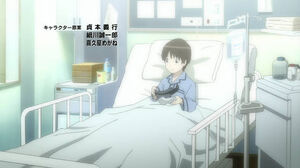 Touha Tanagami (田名神透葉) was an American citizen of Japanese descent, hospitalized as a child with an unspecified disease, possibly some form of immunodeficiency.

Hermit learns that he died in 2015, over 7 years ago, and has been wandering "The World". His first memory was waking up in the cat PC form holding his twig which allowed to him to be "a wizard or something", he had no friends and was alone. His life in the game was a nightmare because he could feel every stab and died countless times. Hermit finally became happy when he met Sakuya which was later learned she was a compatible donor for his disease.

The ending of the OVA, it was introduced that he was going to be alright because his father had him frozen and that his mind was digitized and sent to a digital prison for criminals. Hermit would be returning to his body and return his life and play "The World" with Sakuya and the others. But...there is still someone out there pulling the strings, and what happened to Hermit was no accident...