"I'm the silent type and usually don't have much to say, but it's strange... for some reason, I seem to talk a lot more when you are around."
— Gardenia —

Gardenia (ガルデニア, Garudenia) is a stoic Long Arm of few words in the .hack//Games. She is the object of an energetic fanclub, a fact that she finds annoying, she joins Kite's party because he was one of the few people she knows in the game that didn't worship or idolize her.

Gardenia is a blonde, bushy-haired Long Arm that wears white, green, and gold armor over a matching battle dress. Her red eyes often gaze coldly and she almost never smiles, although she seems to warm up to Kite after spending a lot of time with him.

Gardenia is the quiet type; when she speaks she doesn't make sure to get her point clear, often making Kite misunderstand her. Due to her beautiful avatar, personality, and strength, a "Gardenia Fanclub" entirely devoted to her was created. Ever since, Gardenia has had to dodge obsessive fans everywhere she goes, much to her annoyance. Due to her stoic nature, she is primarily a solo player. Kite is one of the few players she can tolerate for long periods of time, and may be her only real friend in the game.

In real life Gardenia's player is an 18 year old senior in High School, and president of the Naginata club, which explains her choice of Long Arm. While very introverted and taciturn she professes to being a big flower lover. In one of her e-mails, she mentions that she went to the flower fields once and was upset to find them in greenhousess, getting depressed because it seemed like the flowers were trapped inside. She also likes raw food like octopus for the texture. Preferring octopi, squids and sea cucumbers, she likes anything with a chewy texture and especially loves the suction cups. She likes cats, not because they’re cute but for their lifestyle and attitude.

As president of the Naginata club it can be assumed that Gardenia is a proficient martial artist. Due to how she constantly refers to her other real-world responsibilities, it can also be assumed that she plays The World simply for entertainment and is not as obsessed with it like other players.
She likes watching movies; mostly foreign films.

Kite first meets Gardenia in Θ Soft Solitary Tri Pansy after he follows a post on the BBS by the Gardenia fan club. The fan club gives him a letter to deliver to Gardenia and he accepts the job. When he encounters Gardenia in the field's dungeon, it is clear that she wants nothing to do with the letter, but Kite pursues anyway. At the bottom level of the dungeon, Kite aids Gardenia in dispatching a monster. Gardenia, impressed by Kite's skill, agrees to accept the letter on the condition that he joins her party whenever she calls.

Gardenia calls Kite to join her in several fields that have flowers for names. For example, they go to Θ Beautiful Someone's Treasure Gem looking for a Hitorishizuka flower and she ends up letting him keep the Graceful Book he receives at the Gott Statue. Later on, Gardenia invites Kite to Λ Quiet Oblivious Cabbage to take revenge on a monster that had defeated her before. Some time later, Gardenia calls Kite to Σ Dolorous Promised Clavicle and talks about how she feels she is like a flower, and how the life of a flower is short. At the bottom of the dungeon, Gardenia says goodbye; Kite takes this the wrong way, believing her to be referring to her life ending soon. Gardenia laughs and reassures Kite that she meant her time in The World is short since she has obligations in the real world, and that she looks forward to joining Kite whenever she has the chance.

After hearing about a "beautiful and mysterious player", Chimney, NOVA, and BlackRose travel to Θ Soft Solitary Tri-Pansy. In the field they meet several members of Gardenia's fan club, who ask if they've seen "Gar". NOVA tells them that he hasn't, and the fans go off disappointed. Later they meet with Gardenia in a dungeon and help her get away from several of her fans. After thanking them for their help, Gardenia notices BlackRose. Gardenia recognizes her as Kite's partner, but warps away without telling her that she's also a friend of Kite's. Later, when all of Kite's friends gather together, BlackRose is surprised to see Gardenia among them.

2nd Gardenia card in .hack//ENEMY. Using an image of Mimika. 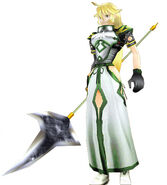