Initially, Endrance's appearance is identical to what is seen in the G.U. games. The only initial difference is the lack of a cat on his shoulders.

However, upon obtaining Xth Form, Endrance's appearance makes a drastic change. Although already feminine before, his Xth form makes him look nothing short of female. Other noticeable differences include the fact that his hat is discarded in favor of a horn-like attachment and a rose, noticeably long and pointy ears, and much longer hair. Also, the artwork gives the appearances that Endrance may have breasts, but examination of the in-game model rebukes the idea.

He still retains his personality in G.U; quiet, seemingly cold and fiercely devoted to Mia, constantly refers to her. He has desire to become strong to fulfill his promise with Mia when he met her as Elk in .hack//Chop Case who told him to become stronger so he could move forward. Shortly, after he was helped by Tokio in order to meet Mia, he expresses fondness and fascination for Tokio, as seen in his Cross Rengeki.

He met Tokio when Bo requested Tokio to help his sister, Saku. After beating the monster at the end of the area, Tokio found Saku introduced herself to Endrance, to which Endrance ignored and instead talk to Tokio. He said to him that he had become stronger and told him to watch as he would grow even stronger for "her" sake and left the confused Tokio who wondered had he met him before but remember nothing.

Endrance first appeared shortly after Tokio watched Haseo's battle against Alkaid. There, he saw Endrance in front of Lumina Cross Chaos Gate with Saku while they were talking about Haseo and Endrance questioned Saku why she's so afraid of Haseo. Saku then noticed Tokio and accused him that he's trying to challenge Endrance, much to Tokio's annoyance. Endrance pushed aside Saku and observed Tokio for several seconds and called him by his name before he log out, surprising Tokio who wondered why did he know him.

In the final match in the Arena, he was defeated by Haseo and afterwards, he didn't appear again until Piros the third got Mia's PC reaction and seeks Tokio's assistance. At the end of the area where Mia's PC was detected, Tokio met Endrance who could sense Mia there. At this time, the power of Akashic Record activated and the fragment of Mia within Endrance who possessed Macha came out from Endrance's PC and merged with Piros who offered to lend his body for her so she could talk to both Endrance and Tokio. She accepted Piros' offer and talk to Endrance who he refers as Elk, making Tokio finally realize that Endrance is Elk. Mia said that she will always be with him and that's why he has to create new memories with others and move on. 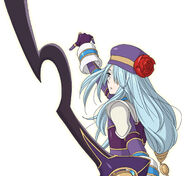