Ender (エンダー) is a character from .hack//Roots, and a secret high-ranking member of the Guild TaN.

Ender appears as a dark-skinned woman with short green hair. She is rather scantily dressed in blue plate armor which covers her entire left leg and arm. She has numerous wave symbols tattoed on various places of her body and is rarely seen without a bladed weapon of some kind, usually a knife.

Ender has a rather disturbing personality. A powerful PKer she gets some sort of pleasure out of hunting and killing other players. However she is mostly interested in players who can actually pose a challenge to her, ignoring weak newbies who aren't a threat. She is also obsessed with the various weapons in the game, and can usually be found examining the different kinds of rare weapons that pass through TaN's @Home.

One of the highest-ranking members of TaN, she controls a small group of "Black Ops" powerful PKers that are loyal only to her and Naobi. These players are not above breaking the rules of the game in order to further the goals of their leaders, or their Guild. 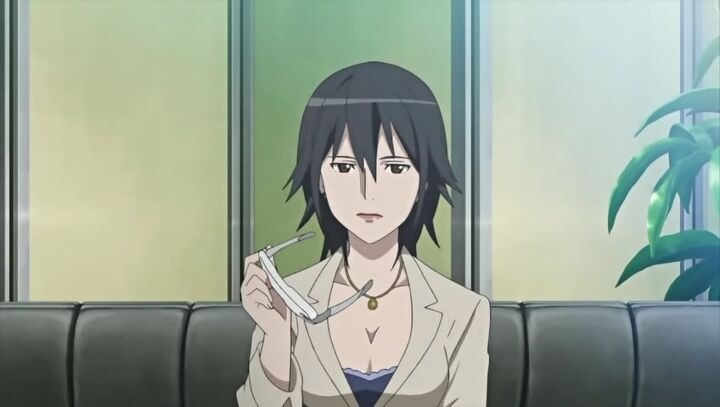 Offline, Ender is Reiko Saeki, a system administrator for CC Corp. She is the same player behind Pi.

Intrigued by Ovan's meeting with the newbie Haseo, Naobi ordered Ender to investigate the relationship between the two players. Tracking Haseo down to a dungeon, Ender threatened to PK him if he didn't reveal everything he knew about Ovan. Ender was surprised that Ovan would take an interest in what she saw as a worthless newbie, but continued watching Haseo's movements from a distance with the help of her guildmate Tawaraya.

Tensions mounted when Ender was ordered by Naobi to start tracking down and PKing players who had been associated with Ovan's Guild, the Twilight Brigade. She easily PKed Tabby, Gord, and succeeded in harassing B-Set but found that her approach was no longer working when the members began uniting and fighting against her. With the job of disrupting the Brigade handed over to Tawaraya, Ender once again began trailing their movements from a distance.

Though the plan was successful the co-leader of the Brigade Shino soon submitted evidence of TaN's illegal activities to the system administrators of The World R:2. Naobi and Ender had expected this to happen, and Ender quickly discarded her character to resume her true form, the System Administrator Pi.