Cubia (クビア), the "Hidden One", is a monster mentioned in the Epitaph of Twilight. The incarnation of Cubia seen in The World R:2 functions as the shadow to the light of Haseo's Xth Form and is referred to as an "Anti-Existence."

End of The World

In one of his files, Jun Bansyoya refers to Cubia as an "anti-existence", a distortion in the system created by the power of Kite's Bracelet. He speculates that Project G.U. could spawn a new anti-existence, one even stronger than Cubia.

In G.U. it is revealed that Cubia was created by Harald as the anti-existence to the Key of the Twilight. When Ovan uses his Epitaph Users Ability "The Rebirth" it casts a light across the network causing AIDA to disappear, but a shadow was also cast causing the birth of Cubia. Cubia has also been called "The shadow of the Epitaph Users" as stated by Yata. The Cubia counter to him is several orders of magnitude stronger than the one made by Kite. It can spawn an unlimited amount of Gomora, which spread throughout both R:2 and the rest of the network, threatening to crash the entire network from the overload, an event that would precipitate the Third Network Crisis. It also possesses the ability to spawn Anti-Existences to specific PCs, which are identical in appearance to Doppelgangers, but are capable of regenerating infinitely when defeated and do not possess the Doppelgangers' added abilities of HP Regen, Stun Resistance, unique weapons with dangerous abilities, or higher character level. The new Cubia can be seen in numerous areas of R:2, and exists throughout the rest of the Internet as well. In a final act of desperation, this Cubia is defeated by Haseo, who absorbs the other present Epitaph Users and finally triumphs with help from Ovan. 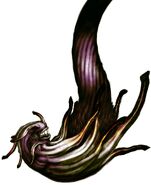 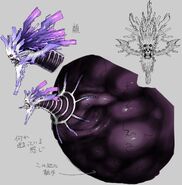 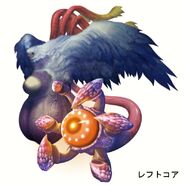 Concept Art of Gomora in .hack//G.U.

Concept Art of Gomora in .hack//G.U.