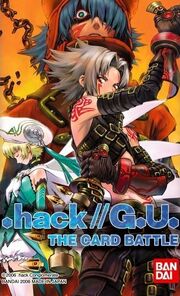 .hack//G.U. The Card Battle is a trading card game in Japan based on the Project .hack and .hack Conglomerate world. Unlike .hack//ENEMY, the game was created by the original staff, ties into the games (through special keywords and Crimson VS), and most of the cards feature original artwork not seen anywhere else. The game has 84 cards in total, sold in ten-card packs, each pack costing 330 yen, including tax. In the United States, that would be equivalent to a little over 3USD. 60 of these cards are normal, 12 are rare, 8 are super rare, and 4 are ultra rare.

There are two sets of rules for The Card Battle. Players can choose to play with a set of rules designed specifically for the card game, or they can use the rules from the fictitious cardgame that exists within the G.U. Games, Crimson VS.