ALTIMIT OS is an operating system created by the ALTIMIT company. A so-called "perfect system," it is used by almost 100% of computer users as their operating system of choice. It is closely tied with CC Corp the developers of The World.

At the beginning of the 21st Century there were multiple computer operating systems in use worldwide. One of these was ALTIMIT OS. A small American company based in San Francisco, it seemed that ALTIMIT would never reach the popularity of the larger operating systems. However, a single event would completely change the destiny of the company.

That event was Pluto's Kiss. On December 24, 2005 a virus created by a 10 year old hacker from Los Angeles shut down the entire internet for 77 minutes. The results were catastrophic; traffic lights shut down, planes collided in midair, and the United State's nuclear missiles were nearly launched. ALTIMIT was the only OS that had not been affected by the disaster, and later studies showed that the OS was constructed in such a way as to make it nearly immune to all known computer viruses. These two things were enough to convince most of the world that ALTIMIT was a perfect OS, making it the most widely sold operating system worldwide. With profits soaring, ALTIMIT went global, opening offices across the planet.

In 2007, the World Network Commison (WNC) passed a law stating that ALTIMIT was required software for all computers, making its saturation of the worldwide market almost 100%. Few people could imagine a computer that didn't run off of ALTIMIT based software. The release of The World, the first online game released since Pluto's Kiss, only increased support for the system.

Public support of ALTIMIT began to fade in the year 2010 when Pluto Again occurred. Rampant networking problems caused people to suspect that perhaps their faith in ALTIMIT had been misplaced. Several new OSs were created by people eager to cash in on these fears. Despite this, ALTIMIT still managed to keep a firm grip on the market, though their control over it would never be as strong as it had been. 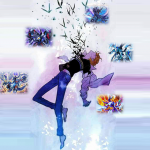