"Be careful, there's a dangerous power hidden inside of you."
— Pi —

Pi (パイ, Pai) is a system administrator for The World R:2, and an Epitaph User, being able to summon Avatar Tarvos.

Pi is a scantily clad Tribal Grappler. She has long pink hair tied into two large pigtails and wears a very revealing red outfit which snakes down her legs. She wears a small pair of glasses on her face which she frequently fiddles around with when trying to make a point.

As Yata's assistant, Pi is required to follow his orders, a job she does willingly. However, unlike Yata, she has trouble seeing The World R:2 and its users in an impersonal way. She has the tendency to become attached to people and occasionally breaks the rules in order to help them out. Despite the tough personality she tries to give off, she is prone to occasional moments of weakness, especially when dealing with other people. Nevertheless she is dedicated to both her job and to Yata and does her best to follow his commands. She is fairly close to the other members of Raven especially Kuhn, though she insists that she only sees him as a coworker. Pi had a very strained relationship with Haseo. Though she recognizes his skill and power, she initially saw him as nothing more than a rude brat with no manners whatsoever, and considered his personality dangerous based on experiences from her own past. She and Haseo gradually built up a deeper relationship and understanding of each other, however. 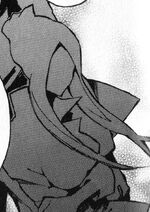 Pi's offline self is a woman currently residing in Tokyo named Reiko Saeki (佐伯令子). She is a workaholic, loves eating out, has a pet cat and is younger half sister of programmer Jun Bansyoya. In 2016, she suddenly quit her job as a programmer to work at CC Corp. Saeki enjoys driving and owns a Maserati.

End of The World

The final file on the Terminal Disc is a letter to Reiko from Jun Bansyoya. He reveals that he's her brother, though they haven't seen each other since she was very little. He tells her that she's a Chosen One, and that the Epitaph PC for Tarvos is on his PC.

For more information, see Ender. Reiko played as Ender until TaN was disbanded and then resumed her true form as Pi. She was then assigned by Yata to track the remaining members of the Twilight Brigade, namely Tabby and Haseo. To help her with her work she restored the account of Saburou, a player who had worked for her in TaN. Saburou directly interacted with the two players while Pi watched from the sidelines. However Saburou soon realized that Pi had more power than a normal player should. When she confronted Pi about it, she became angry with the evasive answers Pi gave her and resigned as her assistant.

Soon afterward Tawaraya returned to The World using the character Tohta. Feeling guilty about the loss of his character, Pi contacted him, but Tohta easily saw through her disguise and recognized her as Ender. He used her to contact Yata and pulled in a favor by requesting that he delete several Real Money Trade players.

Pi was then called in to contact Kuhn, who had awoken his Avatar after coming into contact with an AIDA. She invited Kuhn to join Raven and promised to instruct him on the use of his Avatar. Realizing that there was a serious threat to R:2, Kuhn accepted her offer and left Canard to join up with her and Yata. The two began hunting AIDA together. However their hunt was put on hold when Tri-Edge reappeared and attacked Haseo. Realizing that Haseo's own avatar was about to awaken Yata began making plans to bring him into Raven as well.

At Yata's orders Pi finds herself busy keeping track of the Epitaph User Endrance and his progress in the Arena. Unfortunately for her, her partner Kuhn seems more interested in Nanase than the jobs Yata sets for him.

When Haseo is about to be PKed by Bordeaux, Pi saves him, then leaves, after commenting about a "dangerous power" in his character. She begins to resent Haseo because of how disrespectful he is to her, like calling her an "old hag." She accompanies Kuhn to train Haseo at Δ Great Cursed In-Laws. There, they share with him their knowledge of the Avatars. Although Haseo tries to summon an Avatar for a while, he is unable to do so. Pi begins to provoke him, saying he isn't worthy enough to use an Avatar, but leaves when Kuhn tells her to stop. After they return to Mac Anu and Kuhn leaves, Pi tells Haseo that she came along so both she and Kuhn would be able to stop Haseo if he lost control of his Avatar. Pi states that she and Haseo are very much alike because of their desire to control their Avatar's power.

Pi plays a major role later on as a member of G.U. and is able to summon Avatar Tarvos. During a training mission with Haseo, she ended up getting infected with an AIDA, which in turn forced Haseo into his first battle against another Avatar. Later Pi was one of the two party members to aid Haseo in fighting Azure Kite. 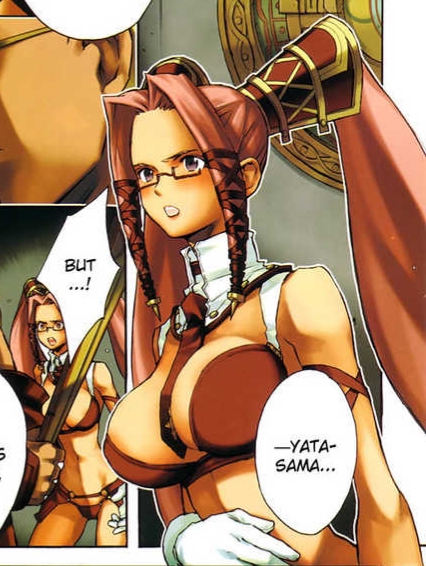 Pi helps Yata retrieve the unconscious body of Haseo after he is defeated by Tri-Edge. After he awakens in the Serpent of Lore, she introduces herself as a member of G.U. Though Haseo refuses their initial request to join, he eventually relents and becomes a member of the organization. Later she appears alongside Kuhn to save Haseo from an AIDA-possessed Bordeaux. After Kuhn and Haseo travel to the Arena, she watches from the Serpent of Lore as Haseo faces off against Endrance, activating Avatar Skeith in the process.

"Be careful, there's a dangerous power hidden inside of you."
— Pi —

Pi is a female avatar with a pair of small glasses, long pink hair and a red leather outfit that travels down her legs.

Reiko Saeki (佐伯令子) is woman residing in Tokyo. During 2016, she suddenly quit her job as a programmer to work at CC Corp. She is the person behind Pi, Ender and is the younger sister of lead programmer and A.I. psychologist Jun Bansyoya. After the restart of Project G.U. Pi began working for Genius to protect Yata from changes within the Akashic Records.

Retrieved from "https://dothack.fandom.com/wiki/User:Outlaw?oldid=69323"
Community content is available under CC-BY-SA unless otherwise noted.